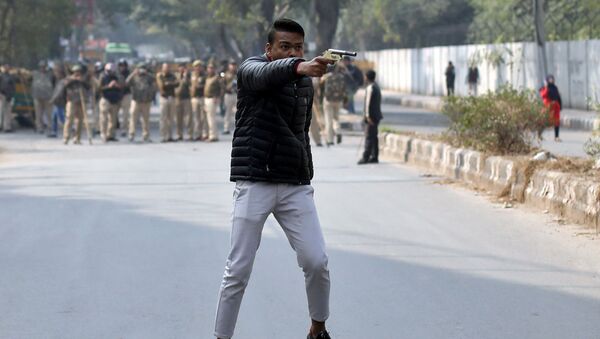 New Delhi (Sputnik): On Thursday, a gun-wielding youngster fired at a public protest against the contentious citizenship law in Delhi, injuring one person. The accused threatened the protesters as they were marching towards Rajghat, the memorial of Mahatma Gandhi, on the anniversary of his martyrdom. Police later were able to overpower the shooter.

Family of the juvenile, who brandished and fired at protesters of the controversial citizenship law (CAA) in the Indian capital city, on Friday, said they were in a shock after watching him on television. The family has said the juvenile had actually left home on Thursday morning for school.

The youth hails from a village in Uttar Pradesh, near Delhi.

“Locals came to our house and showed us the news. We were shocked. In the morning, he left for school like any other day and told us he would return by 4 p.m. People are associating him with the RSS and other groups, but he was not a member of any group. We don’t know where he procured the gun,” the grandfather of the accused told Sputnik.

He further said their boy was mentally disturbed for the last 15-20 days and they had noticed a behavioural change in him. “Since the last few days, he was acting a little different. We tried talking to him, but he would never say anything. He looked tense and mentally disturbed,” the grandfather added.

Meanwhile, Delhi Police sources said the accused didn’t show any signs of remorse during interrogation. So far, he has denied being affiliated with any organisation.

“He told us that he is not ashamed of what he did, ‘Shoot me if you want’. He got radicalised after watching videos on social media and wanted to take revenge for the death of Chandan Gupta (killed during violence in 2018 in Uttar Pradesh state), about which he wrote on his Facebook posts before committing the act,” police said.

The initial investigation revealed that he obtained the gun from someone in his village (Jewar) in Uttar Pradesh on Wednesday night, and came to Delhi for the first-ever time.

The juvenile will be produced before the Juvenile Justice Board later on Friday, police said, adding that the injured student, Shadab Alam, a student of Jamia Millia Islamia who suffered a bullet injury to his left hand has been discharged from the hospital. 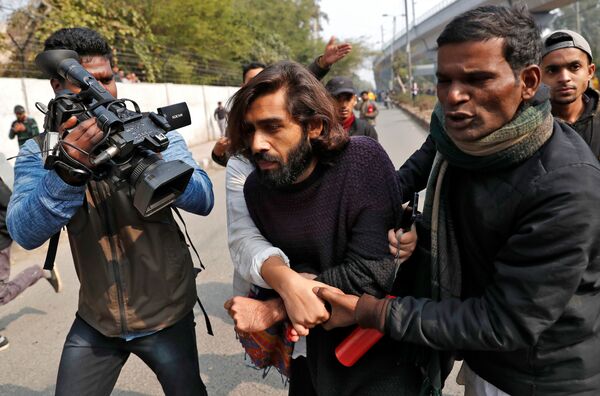 A wounded man is helped after an unidentified man opened fire during a protest against a new citizenship law outside the Jamia Millia Islamia university in New Delhi, India, January 30, 2020.
© REUTERS / DANISH SIDDIQUI

On Thursday, minutes before opening fire, the accused had gone live on his Facebook profile.

After his live post, he posted several messages on Facebook; one read "Going to f**k them in two minutes" "Please take care of my family", "I'm the only Hindu here", referring to the ongoing protests against the Citizenship Amendment Act, 2019 (CAA), attended primarily by Muslims.

In one of his posts, he wrote, "I'm on my last journey, I want to be draped in saffron colour and want people to chant "Jai Sri Ram". The saffron colour is linked to Hindu groups in India.

'My Last Journey': Man Who Fired at Delhi Protestors Went on Facebook Live Prior to Attack
Over the last few weeks, India witnessed large-scale, sometimes violent protests across the country, against the controversial law.

Enacted in December 2019, India's Citizenship law or the CAA seeks to grant citizenship to Hindu, Sikh, Christian, Buddhist, Jain, and Parsi illegal immigrants from Pakistan, Bangladesh, and Afghanistan, who faced persecution at home and arrived in India before 2015.

However, it excludes Muslims, angering the law's political opponents, who view the legislation as discriminatory and unconstitutional. Many protests are taking place across the country; the government, however, insists that the law doesn't discriminate against any religious groups.