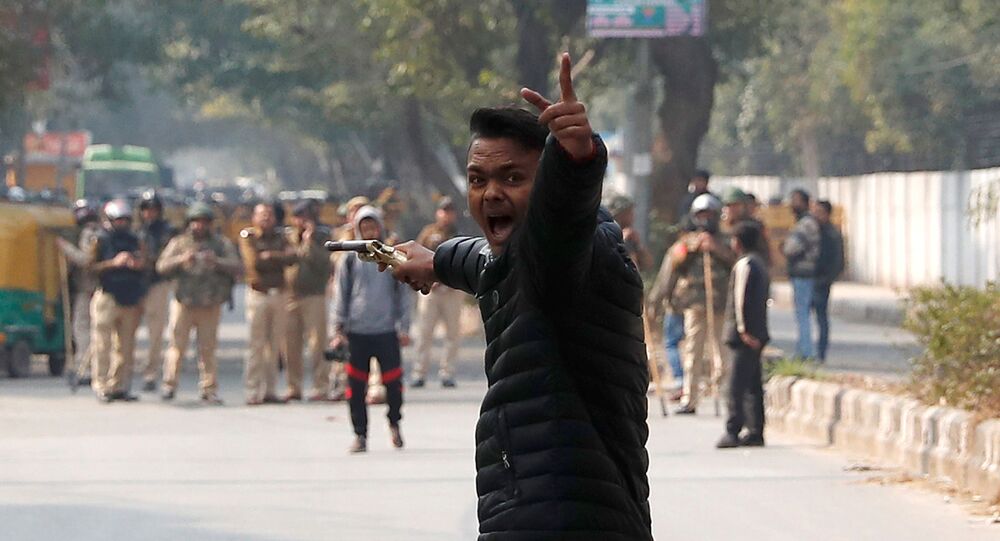 New Delhi (Sputnik): A gun-wielding man fired at a protest against a contentious citizenship law in New Delhi on Thursday, injuring one person.

Minutes before opening fire on protestors gathered in New Delhi to demonstrate against the amended citizenship act, a suspected gunman, identified as Rambhakt Gopal, went on Facebook live, according to his profile, which has since been taken down.

Around 11:00 Hrs IST, the accused wrote: “All brothers are requested to see me first”, later going live and showing the students gathered outside Jamia Millia Islamia, a premier federally-funded university in the Indian national capital.

After his live post, he shared several messages on Facebook, with several allegedly reading, “Going to f**k them in two minutes”, “Please take care of my family”, and “I’m the only Hindu here” in a reference to the ongoing protests against the Citizenship Amendment Act, 2019 (CAA), mostly by Muslims.

In one of his texts, he wrote, “I’m on my last journey, I want to be draped in saffron colour and want people to chant 'Jai Sri Ram'".

Gopal’s last post before going on Facebook live again was “Shaheen Bagh, Game over” - an allusion to the massive protest led by women in south-west Delhi’s Shaheen Bagh area that's been ongoing since 15 December 2019.

© AFP 2019 / SAJJAD HUSSAIN
One Reportedly Injured After Unidentified Man Fires at Anti-Citizenship Law Protestors in Delhi
In one of the videos which went viral on social media, a man, who is believed to be Gopal, is seen brandishing the gun while shouting ‘Yeh lo Azadi’ (Here’s your freedom). Later he fired at the protesters before being overpowered by the people around him and arrested by police.

Gopal’s Facebook profile shows that he is a 19-year-old resident of Jewar in northern Uttar Pradesh, near Delhi.

According to police, a student from the Jamia Millia Islamia sustained a bullet injury to his left hand and was taken to a nearby hospital.

Over the last few weeks, India has witnessed large-scale protests across the country, turning violent in some places, against the controversial citizenship law (CAA).

The Indian federal government enacted the CAA on 13 December 2019 seeking to provide citizenship to illegal immigrants of minority communities from three neighbouring Islamic countries, Afghanistan, Bangladesh and Pakistan, who arrived before 2015.

The law didn't extend the same rights to Muslims, therefore its opponents claim it is discriminatory to Muslims and also against the provisions of the Indians Constitution. Prime Minister Narendra Modi has, said that no Indian citizen would be affected by the law as it “seeks to grant citizenship, not snatch it”.