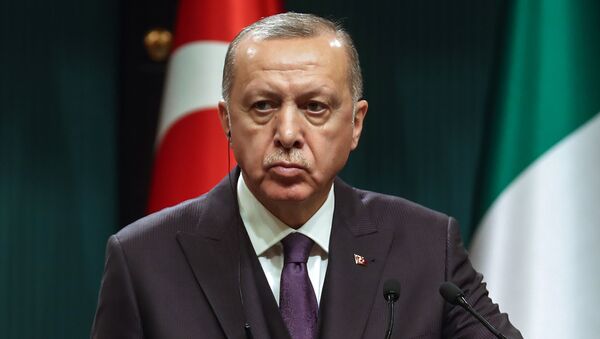 On Tuesday, US President Donald Trump unveiled his peace plan for the Middle East aimed at resolving the Israeli-Palestinian conflict.

"Jerusalem is sacred for Muslims. The plan to give Jerusalem to Israel is absolutely unacceptable. This plan ignores Palestinians' rights and is aimed at legitimising Israel's occupation," Erdogan said, as quoted by CNN Turk broadcaster.

The plan, aimed at resolving the Israeli-Palestinian conflict, offers a two-state solution with Jerusalem to remain Israel's "undivided" capital but with the Palestinian capital to "include areas of East Jerusalem".

Mr Erdogan also commented on his country's row with the US over Ankara's participation in the US-led F-35 fighter jet programme.

He said that the US should either deliver the F-35s to Turkey or provide a refund.

Last year, the US banned F-35 shipments to Turkey following Ankara's decision to buy S-400 air defence systems from Russia. Washington claims that the Russian systems are incompatible with those operated by NATO member states and present a threat to the fifth-generation F-35 jets' state-of-the-art technology.

Turkey decided to buy S-400 systems from Russia after the US halted the approval process for the sale of its Patriot systems. Ankara has repeatedly said that it would not abandon its defence cooperation with Moscow, adding that it is also interested in participating in the US-led F-35 programme.

Presidents Trump and Erdogan have set up a joint working group to find a compromise on the issue.