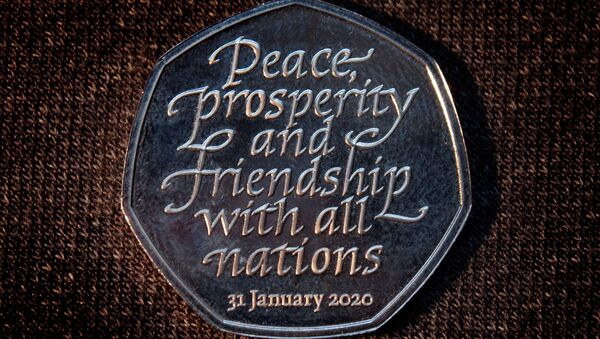 Tim Korso
All materials
As the 31 January Brexit date draws nigh, those opposed to the initiative from the start, so-called remainers, have ramped up warnings of the imminent threat to the UK economy, health care system and other linked spheres.

A commemorative 50 pence coin, featuring the inscription "peace, prosperity and friendship with all nations" and the 31 January 2020 date, dedicated to the upcoming Brexit, is about to be released in the UK and has again split the country into those who see it as 'okay', and those who don't want to touch it with a ten foot pole.

The latter trend found support in Alastair Campbell, a spokesman in Tony Blair's government, who promised to ask shopkeepers for 20 and 10 pence change if he is given the new Brexit coin. Campbell went as far as to promise to resort to profanities if a shopkeeper refuses to give him other coins. He claimed that the UK divorce with the EU won't bring any of the things mentioned in the coin's inscription.

I for one shall be asking shopkeepers for ‘two 20p pieces and a 10’ if they offer me a 50p coin pretending that Brexit is about ‘peace, prosperity and friendship with all nations’ given it puts all three at risk. If they insist I will be channeling this man pic.twitter.com/9nypxaQgxT

His position was echoed by Labour peer Lord Andrew Adonis, who vowed not to use or accept the new coin. Their intentions found a lot of followers on social media, who also castigated the idea of the coin, and came up with other alternatives on how to get rid of the commemorative coin – for example by drawing remainer signs on them with permanent markers.

I am never using or accepting this coin pic.twitter.com/93hU1jgKzo

Brexit will mark the end of an era of peace, prosperity and friendship with all nations. #Brexit pic.twitter.com/PID2qJRHDe

If you ever get one of these atrocities, give it to a bartender. God knows they need a drink too... #Brexit50p pic.twitter.com/iRaFvOPVjO

The trend was quickly hijacked by various charities who urged people dissatisfied with the coin and willing to ditch it to simply donate them for any good cause.

To all the remaintards out there who are threatening boycott, refusal and even violence if they are offered a #Brexit50p.

Do the right thing donate it to charity, like the Maggie Oliver Foundation - for victims of child rape gangs.

Agreed. I’m not fussed on the brexit coin idea, but if anyone is offended by a #Brexit50p burning a hole in their pocket, I’m sure our charities will appreciate all those extra 50p’s gathering in their collection boxes. pic.twitter.com/AOV41bQVxQ

Some remainers were more inventive in their trolling of the coin, comparing UK Mint head Sajid Javid, who presented the new coin, with J.R.R. Tolkien's Gollum, holding the One Ring. Another user went further, wittily describing the coin as a malicious "artefact" in the setting of the iconic tabletop roleplaying game Dungeons & Dragons.

This coin marks the beginning of an exciting new chapter in British history. Let’s look forward with confidence & unleash the enormous potential of our great country. https://t.co/QNpEDHDutz pic.twitter.com/HZDVhEzSXK

Not everyone hated the new coin due to an opposing political stance. Philip Pullman, author of the popular fantasy trilogy His Dark Materials, tweeted that the Brexit coin should be boycotted for a lack of Oxford comma in its inscription.

The 'Brexit' 50p coin is missing an Oxford comma, and should be boycotted by all literate people.

Such vehement opposition to a simple token marking a major event in UK history found little understanding among the remaining Twitterians, who were quick to accuse Brexit coin-haters of overreacting.

Remoaners accuse Leave voters of being simple-minded and a bit unhinged. Meanwhile, they have spent the weekend raging against a 50p coin, even calling for boycotts. The #FBPE crew is far more mental than the Brexiteers they loathe. #Brexit50phttps://t.co/bPX54jDKSd

"So it's ok for it to be hard for us but not for you?" Nice comeback on #jeremyvine debating if #Brexit50p is an insult to remainers. #Brexiteers have been verbally abused for 4 years. Remainers are in a meltdown over a sodding coin which "offends" them. Seriously?!!

Those, who were okay with the new coin seemed to not mind the intent to boycott, although calling the action a waste of time and money.

This is ridiculous and a waste of time. Shops won’t accept a defaced coin and so they won’t re-enter circulation. You will just be 50p down and the cost of a marker pen! #Brexit50p https://t.co/wY0HQwfvY1

Remainers receiving a #Brexit50p in their change after buying some soy. pic.twitter.com/YFhuquR8GV

Julia Hartley-Brewer, a host at the talkRADIO, played on the notion of donating Brexit coins to charity, and promised to toss some of her own commemorative 50-cent pieces to provide dissatisfied remainers with all necessities.

I’m gonna start a crowdfunder for everyone to donate their #Brexit50p coins to provide vital supplies like these for Remoaners as we mark Brexit Day this Friday. It’s the right thing to do. pic.twitter.com/uD8QybOYVY