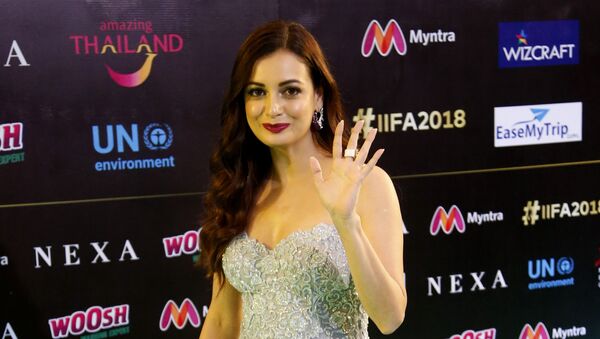 New Delhi (Sputnik): Dia Mirza, who made India proud with her Miss Asia Pacific 2000 title, appeared on the big screen in the 2001 release “Rehna Hai Tere Dil Mein”. She later worked in movies like “Dus”, “Lage Raho Munnabhai” and “Sanju” and launched her own production house with the name “One India Stories” last December.

Indian actress Dia Mirza, who is also the Goodwill Ambassador of charity, Save the Children, has revealed that she had to deal with a stalker in her home town Hyderabad when she was younger.

"When I was younger, back home in Hyderabad even I faced a stalker. I confronted him and asked him his name. That moment, the boy didn’t have an answer. One should never ignore or be afraid of reporting or calling out a harasser. There is no shame in doing so. It empowers us with the ability to address the problem and more often than not data indicates that it makes a big difference. The harassment does stop," said Dia, reported Indian news agency IANS.

The 38-year-old actress felt safety was not just a law and order issue but is much more, “with its long and firm roots in the mind-sets and the play of patriarchy”.

“The manifestations of violence can take as horrific a turn as rape. It renders me speechless to hear how young children also fall prey to most heinous of violence and violations," she said.