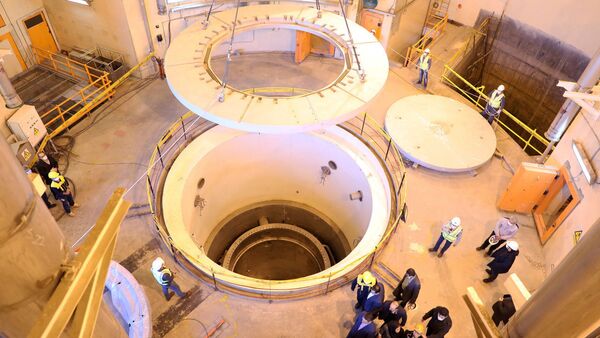 © REUTERS / Wana News Agency
Subscribe
Tehran is to date at the fourth stage of giving up its 2015 nuclear deal commitments following a US pullout from the accord. The Islamic Republic has also been accusing its European partners of what it says is a failure to effectively halt the unilateral economic blockade of Iran.

French Foreign Minister Jean-Yves Le Drian has noted that if Iran carries on violating the nuclear accord (JCPOA), it could have access to a nuclear bomb within 1 to 2 years.

"If they continue with unravelling the Vienna agreement, then yes, within a fairly short period of time, between one and two years, they could have access to a nuclear weapon, which is not an option", Le Drian told RTL radio.

EU foreign ministers are scheduled to hold an emergency meeting on Friday to seek ways to guide the United States and Iran away from confrontation, inlcuding with regard to nuclear issues.

Iran the other day warned that it would take the next steps away from its commitments under the nuclear deal, officially known as Joint Comprehensive Plan of Action (JCPOA), insisting that the measure will be implemented if its European partners fail to fulfil their own commitments, Iranian Supreme National Security Council Secretary, Rear Admiral Ali Shamkhani pointed out, against the backdrop of intensified tensions between Iran and the US following the death of Iran's elite force commander Qasem Soleimani in a US drone strike last Friday.

Hot on the heels of the assassination, Iran announced on 5 January in a statement that it was discontinuing its remaining obligations under the 2015 deal, which stipulated that Iran would be free of western economic limitations in exchange for it easing its nuclear programme. The country announced that it would now start enriching uranium to meet its technical needs and it would happen in a "peaceful" manner.

Western powers, however, expressed concerns over the motion, with UK Foreign Secretary Dominic Raab remarking that he would be looking "hard" at what awaits the Iranian nuclear deal following Tehran's refusal to comply with the JCPOA.

Shortly after the comments, Iranian President Hassan Rouhani brought up the matter in a telephone conversation with European Council President Charles Michel, arguing his country is, vice versa, looking to strengthen the nuclear deal, with the latest refusal to follow the restrictions being necessary to create a balance in the accord.

In May 2018, US President Donald Trump announced that his country was unilaterally withdrawing from the JCPOA, thereby reimposing the previously lifted economic limitations on Tehran. A year later, the Islamic Republic said that it would gradually suspend its obligations under the deal.

000000
Popular comments
BS, Iran doesn't need a Nuclear Weapon. Russia, China, Pakistan are Iran's allies and pledged to strike back if any Nation (Israel, USA) hits Iran with a Nuclear Bomb. Remember for decades USA has threatened to Nuke China if Taiwan were bombed, not with a nuclear weapon but invaded etc. That was then, this is now.