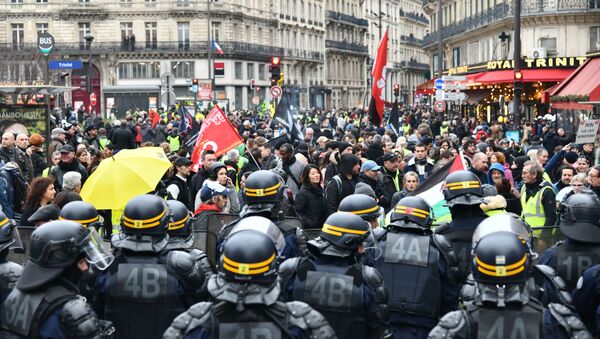 © Sputnik / Dominic Buten
/
Go to the photo bank
Subscribe
Ekaterina Blinova
All materialsWrite to the author
The French government is seeking a way out of repeated waves of protests and strikes across the country, triggered by Emmanuel Macron's domestic reforms. Karel Vereycken, vice-president of France's Solidarity and Progress Party, has explained what's behind the recent wave of strikes and what could hypothetically calm the unions down.

Over 450,000 demonstrators marched across France on Thursday with teachers, lawyers, and doctors joining the 36-day public sector strike – one of the longest since May 1968 – over President Emmanuel Macron's pension reform.

The French hardline union leaders, who've been protesting since 5 December 2019, want the Macron government to throw out a plan to replace France's 42 separate pension regimes with a universal points-based system that would make the official retirement age of 62 obligatory for all workers and envisages it being raised up to 64 years. However, the French president made it clear in his New Year address that "the pension reform will be carried out".

"Macron is in a dramatic state of denial", says Karel Vereycken, a French journalist and vice-president of the Solidarity and Progress Party. "And as the African proverb says, to clap hands, you need two of them. Key influentials, some of them 'late evening visitors' at le Chateau, are desperate. 'I don’t talk any longer to him, because it's a waste of time', said one of them. The President of France increasingly has isolated himself".

According to the journalist, Macron's "training as an investment banker prevents him to think out of the box of the very neo-liberal economic and financial models that drove the West, including France, to disaster".

"While the government is supposed to reopen a dialogue on Friday with the unions, the law is already under legal review by the State Council", Vereycken stresses. "The government has no intent to change one iota and is simply waiting out the clock. Therefore, the stalemate will worsen as no face-saving options are available".

The politician points out that while Macron's pensions reform appears to be the "very big straw" that eventually broke the camel's back, it is essentially "decades of wrong policies destroying [France's] industry, agriculture, jobs, health system, children, education, and especially [the people's] hopes for a better future" that is behind the French ire.

"For them, Macron, by submitting himself to the same Thatcherite follies as Ronald Reagan and Tony Blair, has to be removed", Vereycken opines. "Today, for the people – but not yet for Macron – it has become clear that the 'trickle-down theory' in economics which supposes a government offering advantages to the rich and wealthy will attract investors which in the end will create jobs and bolster production, has been proven worse than an illusion – a swindle".

He recalls that during the 2008 global financial crisis, the neo-liberal elites' "saving the banks first" approach turned the European Union into a "no-growth zone": "While 10 to 30 percent of urban professionals, mostly shareholders, have increased their wealth, the remaining part of the population has seen their living standards collapsing", Vereycken highlights.

The politician bemoans the fact that vast amounts of cash going through the French financial system "are immediately absorbed by speculative bubbles and do not create jobs at all", while "negative interest rates and inflation, required for maintaining the system for the happy few, are spoiling people’s savings, life insurance and deposits".

"In fact, with Jacques Cheminade [the head of Solidarity and Progress, who has thrice run for president of France], I’m saying that only the return to a sovereign National Bank, would allow to issue credit for great infrastructure programmes and allow massive job creations which in turn would solve the equation of who’s going to pay for the pensions. Equal wage treatment for women performing the same jobs as men, would also contribute massively to the solution", Vereycken emphasises.

Some 'Surprise Compromise' May Calm Unions Down

The country has been engulfed in nation-wide social protests since the emergence of the yellow vests grassroots movement in October 2018, initially over growing taxes, rising fuel prices, and the high cost of living. The yellow vests have been taking to the streets for more than a year, calling for social justice and the resignation of Emmanuel Macron. Recently, they joined unions in pension reform protests.

"The yellow vests, unfortunately without a clear political vision, by obtaining some marginal victories, play a key role", Vereycken suggests. "It is they who have 'kicked a**' among rank and file union members who now are telling their leadership they should fight or face their anger. The government is doing everything, and I really mean everything, to prevent all these angry forces from converging into one single raising fist".

Commenting on how the situation might unfold further, the French politician presumes that Macron may push his Prime Minister Edouard Philippe "to stick out his neck" and resign if the pension reform is finally cancelled.

Vereycken does not rule out that "some surprise 'compromise' such as dropping the 64 years age minimum to benefit from a full pension, will calm down the French Democratic Confederation of Labour (CFDT) union, who made this their 'red line'".

"Some major figures of Macron’s own party, which see themselves already getting bloody electoral defeats at the upcoming March communal elections, are trying, so far without success, to get the president to make a compromise on this issue, as it is the key to get the rest of the reform adopted. Lonely Macron, who feels betrayed by his closest friends, by sticking stupidly to his guns, might end up shooting his own leg", the journalist foresees.