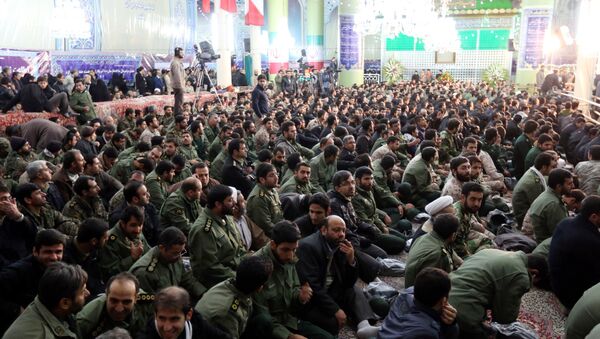 TEHRAN (Sputnik) - Iran is in a "high state of alert" in the wake of the killing of Iranian general Qasem Soleimani by the US and is ready to strike US and European bases in the Middle East if need be, Islamic Revolutionary Guard Corps official Maj. Gen. Mortada Qurbani said on Tuesday.

"Mr. [US President Donald] Trump, Europe and the US, we are in a high state of alert to destroy your bases in the region and humiliate you," he said.

He noted that "Trump was too young" to undermine Iran and the IRGC using US weapons and equipment.

"This is also within the highest authorities' decision-making, and we are only in the Revolutionary Guard Corps, but the response will be until the end," he said, asked about the degree to which Iran would respond to any more aggression.

He added that the US and Israel "were in the forefront" to be hit by Iran, when asked if Iran would strike US allies in the Middle East region.

"When they are struck [the US and Israel], other countries, God willing, will return to common sense," he concluded.

He also said that the strike at Qasem Soleimani came from a US helicopter.

"It was a helicopter, but not a drone," Mortada Qurbani said.

The general said he did not know the location that the helicopter came from on Friday to launch the attack on Soleimani at the Baghdad airport in Iraq.

The killing was followed by a series of rocket strikes that targeted Iraqi bases housing US troops in central Baghdad and in Balad, about 50 miles north of the capital.

On Friday, Soleimani was killed in a US drone strike ordered by US President Donald Trump at the Baghdad International Airport, with his assassination dramatically escalating tensions in the Middle East.