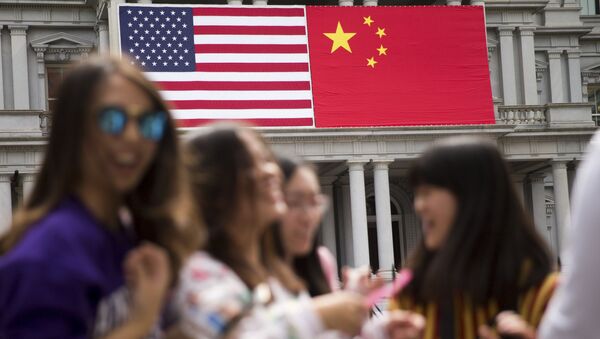 Oleg Burunov
All materialsWrite to the author
Beijing and Washington have been embroiled in a trade dispute for more than a year over what US President Donald Trump attributed to unfair economic conditions and non-competitive behaviour by China, which rejected the claims.

In an interview with Al-Jazeera on Friday, Huiyao Wang, the founder and president of the think tank Centre for China and Globalisation, specifically focused on what he described as the “unprecedented trade spat” between the US and China, which he claimed “certainly is a big deal” for Beijing.

According to him, there will be psychological consequences from the bilateral tariff war.

"I don't think there is a lot of economic impact. […]The thing about the China-US trade war is that it dampens confidence, it actually makes people reluctant to invest and also […] the value chain is hit by that”, he asserted.

Wang warned that apart from the US and China, many other countries will be affected by the trade row, adding, “I don't see how the world economy will maintain such a strong growth and then become effective”.

In this vein, he praised both sides’ efforts to conclude a bilateral trade deal that he said is “absolutely crucial” and which he said may help resolve the current “alarming situation” around the US-China trade spat.

“Because if we do not do that, I mean the two biggest economic powers in the world and then, if they really fight […] all the others will suffer, absolutely. And then, we may drag the world into a recession. And that's quite possible, too, and we may have another financial crisis”, Wang concluded.

He spoke after US Trade Representative Robert Lighthizer told CBS earlier this month the US-China Phase One trade deal is "totally done", although there would be some routine "scrubs" to the text.

The Chinese side, in turn, expressed hope that Beijing and Washington would be able to resolve their existing problems on the basis of equality and mutual respect.

The Phase One deal is expected to cover key trade issues, including intellectual property, financial services, and US agricultural exports.

The agreement comes as the world's two leading economies remain engulfed in a trade row due to what US President Donald deemed unfair economic conditions and non-competitive behaviour by China, allegations that Beijing rejects.

The trade war erupted in June 2018, when the US imposed the first round of tariffs on Chinese imports, prompting Beijing to respond in kind. Tariffs were slapped on tens of billions of dollars worth of Chinese goods, including clothes, toys, phones, and laptops. Also among those who have come under pressure is the Chinese tech giant Huawei.