Move Your Body! Top Viral K-Pop Dances of This Decade 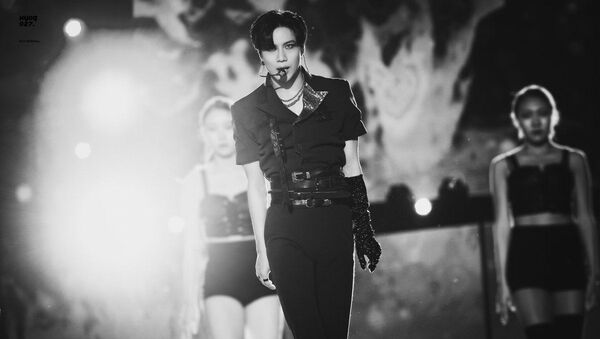 CC BY 2.0 / palu_s /
Subscribe
It’s no secret that in addition to music, K-Pop is famous for its choreography and dances, some of which are popular in Korea, while some are known across the entire world.

Despite the fact that usually K-Pop dances are quite difficult for the average person to replicate, a lot of them have movements that many non-idols want to repeat. Here is a selection of dances that became viral between 2009 and 2019.

'Sorry, Sorry' perfomed by Super Junior in 2009 was a real hit and was played to death all around Asia, and many famous South Korean groups, including NCT and BTS have since covered the dance.

'Ring Ding Dong' by Shinee was released in 2009. It charted at the top of the South Korean music charts and gained a lot of attention for its repetitive lyrics and catchy hook. It was even the number one banned song before college entrance exams in South Korea in order to allow students to focus on their exams. Shinee are famous for their complex choreography, but this one dance was quite simple and went viral as a result.

The girl band released the song in 2009, and it won "Best Dance/Electronic song of the year" in 2010 with a "saucy" dance involving band members moving their hips suggestively, which attracted some criticism at the time.

Released in 2011, the song "Fiction" from the first full-length studio album "Fiction and Fact"  brought success to the Beast boys band and earned numerous awards. After leaving Cube entertainment in 2017 and forming Around Us Entertainment the group changed their name to Highlight. But the famous legs' moves are still remembered as "dance from Beast Fiction."

Formed in 2010 by Woollim Entertainment, the boy band Infinite is famous for their synchronised dancing. The main single "Be mine" from their first studio album "Over the Top" was a big hit in 2011 and its catchy moves brought fame to the band.

A Korean phenomena, that was the first YouTube video to reach one billion views. It was released on July 15, 2012 and topped the music charts in more than 30 countries. The simple "horse dance" became viral very fast and became the source of parodies and cover dances not only in Korea, but all over the world. This dance and song increased the world's interest in Korea and its culture.

One of the most recognisable songs in the list, "Growl" by "Korea nation's pick" boy band EXO was released in 2013 and the artistic dance performance, taken in one shot, drew much attention to the rookie group and earned them several awards on their rise to musical stardom. Billboard picked ‘Growl’ as the best K-pop song of 2013.

This South Korean girl band was a quintet and in 2017 became a quartet under Chrome Entertainment. In 2013 it made a viral hit with the title song ‘Bar Bar Bar’ from the album of the same name. Their outfits and choreography helped the girl band achieve success, win numerous awards in Asia and be noticed by Billboard where they reached number 1 on Billboard's K-Pop Hot 100.

Formed in 2012 girl band EXID didn't get proper attention until 2014, when a fan-recorded live performance of the digital single ‘Up & Down’, focused on the group member Hani, went viral on South Korean social media. And that hip move served as a hub for EXID.

The subduo of the Super Junior consisting of Donghae & Eunhyuk, managed to go viral with "Chok Chok dance" from their first "The Beat Goes On" EP in 2015. After their comeback performances on music shows during the promotion, the song ‘Can you feel it?’ won people's hearts with its funny and simple dance and got its own video, where idol-colleagues of the duo can be seen, including Amber from f(x), EXO and Red Velvet.

In 2015 JYP Entertainment released the GOT7 's third EP ‘Just Right’ and the title song under the same name. The MV became famous due to their colourful look, the funny and cute acting of the band and its simple dance, which has since had a lot of covers made on YouTube. The band even released two versions of their dance practice in the same cute way.

The Korean music industry’s biggest name - Big Bang - won a lot of awards "Bang Bang Bang" in 2015; it is also one of the best-selling digital singles of all-time. Not only because of the looks and music but also because its energetic and simple dance is an object of affection for both fans and non-fans from around the world.

The girl group whose name – I.O.I – means Ideal of Idol, was formed during the reality show ‘Produce 101’ in 2016 and consisted of 11 members chosen from 101 girl-trainees from various companies. Now the girl group has disbanded, but the dance and song still rock!

South Korean girl group Twice is called a "Top-trend Girl Group" in South Korea and has had a big fanbase and wide recognition since 2016, when they released the lead single ‘TT’ from their third extended play ‘Twicecoaster: Lane 1’. It became one of the best-performing songs in 2016 and most viewed K-Pop girl group music video of all time.

Being the first released single of Sunmi after the disbandment of the girls band Wonder Girls, it hit the charts in 2017 and got into the US World Digital Song Sales rank. Many people and idols fell in love with the sign move in the chorus and made a point of dancing to it, even SHINee' s Taemin, recognised as one of the best dancers in the industry, joined the dance on Sunmi's performance on MAMA 2017.

Positioned like "a summer song from the summer special album", Red Velvet's ‘Red Flavour’ became the most significant song in their career due to its "fruitiness" and catchy choreography, which got the attention of audiences all over the world.

Move is the second studio album by Taemin, the junior member of SHINee, who is known as one of the best dancers among South Korean idols. With the aim of breaking gender frames Taemin with the help of Japanese choreographer Koharu Sugawara created easy and clean choreography for the music video in 2017, which became viral very fast for its uniqueness and fresh view. A lot of K-Pop cover dancers made covers of the song.

Blackpink, a girl group formed by YG Entertainment, debuted in 2016 and managed to get fans and awards very quickly. The MV for the song ‘Ddu-Du Ddu-Du’ reached 1 billion views in one day, the first K-pop group to do so. The dance from the video was danced everywhere, and started a trend of male dancers covering more feminine dances.

South Korean MLD Entertainment made a girl band through the 2016 reality show "Finding Momoland". And the girl band made a real breakthrough with the lead single ‘BBoom BBoom’ of their third extended play ‘Great!’, which gained the Best Dance Performance Award at the 2018 MBC Plus X Genie Music Awards.

The Love Shot from the fifth studio album under the same name of the K-Pop Kings EXO - really shot straight to the hearts of people with the "gun" gestures, especially the solo of the main dancer Kai, that made the dance viral among stars and made the band even more recognisable. The song was included in the 25 best K-pop dances of 2018 by SBS PopAsia.

Another band, Stray Kids formed after the survival show by JYP Entertainment through 2017, gained a lot of attention and love, for doing the songwriting themselves and participating in the process of making albums and being passionate about the process. All the jumping moves from their "MIROH", released in 2019 from the fourth extended play "Clé 1: Miroh" were a hit with audiences all over the world.