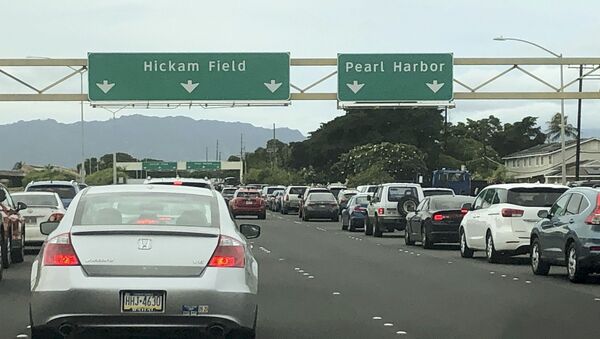 An unidentified US serviceman opened fire on Wednesday at the Pearl Harbor Naval Shipyard in Hawaii. Local media said earlier, citing authorities, that multiple people were injured in the shooting.

Two people have died after a US serviceman went on a shooting spree at Pearl Harbor, Hawaii, on Wednesday, Reuters reported, citing military officials at a press briefing.

A third victim is said to be in stable condition after being admitted to hospital, while the perpetrator also died from "an apparent self-inflicted gunshot wound". The identities of the victims and the gunman have yet to be revealed.

After earlier media reports suggested, citing eyewitnesses that the alleged gunman was a local sailor who shot three civilians, the Joint Base Pearl Harbor-Hickam (JBPHH) confirmed in the statement that a US serviceman had injured three Department of Defence civilian staffers before committing suicide.

Officials at Joint Base Pearl Harbor-Hickam report the shooting incident at the Pearl Harbor Naval Shipyard has been secured. One person is confirmed dead. The shooter has been identified as a U.S. Sailor. #PearlHarbor

​Local authorities have launched an investigation into the incident.

Base security and Navy investigative services are currently investigating. The names of the victims will not be released until the next of kin have been notified. #PearlHarbor

​According to earlier media reports, citing multiple sources, a male suspect was killed by authorities after he injured at least three civilians. According to The Hawaii News Now media outlet, at least two people are said to be in critical condition. The exact identity and incentive of the suspect reportedly remain unknown.

A witness claimed earlier, cited by the media outlet, that the suspected shooter fatally shot himself.

#BREAKING: Victims appear to be civilians. Shooter, according to a witness, was a man dressed in a sailor's uniform. Hawaii Dept. of Transportation says all flights are still operating. Unclear about military flights. #PearlHarborShooting #ActiveShooter pic.twitter.com/XEgFMkMA72

Hawaii News Now said earlier, citing eyewitnesses, that the area had been immediately locked down following the first shooting reports. The shooting is reported to have happened at Drydock 2.

JBPHH security forces have responded to a reported shooting at the Pearl Harbor Naval Shipyard. The incident occurred at approximately 2:30 p.m. Due to the ongoing security incident, access/gates to #JBPHH are closed. We will update when we have further information. pic.twitter.com/6uZulGOUTx

​The shooting occurred several days before 7 December, National Pearl Harbor Remembrance Day, the 78th anniversary of the infamous surprise aerial attack carried out by Imperial Japanese forces on the lagoon harbor on the island of Oahu, killing 2,403 and causing the US to enter into World War II.

Currently, Joint Base Pearl Harbor-Hickam is a combined US Air Force and Navy Installation located 8 miles (13 km) from Honolulu.