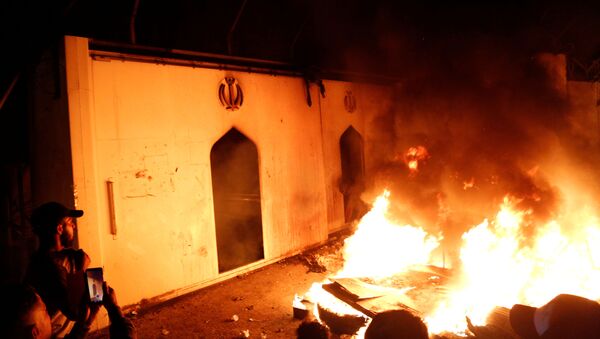 Dozens of demonstrators were injured in clashes with security officers close to the Iranian consulate in Najaf on 28 November.

Demonstrators have reportedly set the Iranian consulate building in the Iraqi city of Najaf on fire for the second time in a week as violent protests rock Iraq’s southern regions.

Protesters, mostly young people, have reportedly accused the Iraqi elites of being corrupt and serving the interests of foreign powers, especially Iran, while the country is plagued by endemic poverty and mass unemployment.

Protesters chanted "#Iran out of #Iraq" as flames engulfed the building. This is the 3rd attack on an #Iranian consulate. pic.twitter.com/srSGkvo6Ab

​​The reports come after demonstrators broke into the Iranian consulate building in Najaf and torched it a few days ago. The situation prompted the authorities to declare a curfew in Najaf province. On 29 November, media reported that at least 45 demonstrators had been shot dead by security forces and 152 others had been injured during violent protests in the south of Iraq and the country’s capital of Baghdad.

#Iraq: Someone put fire on a mausoleum in #Najaf, which is for many Shia a holy-like town. pic.twitter.com/YZloHLLZFZ

Demonstrations reportedly continued in Basra and Nasiriyah, where the largest oilfields are located. In Kut, Basra, Hilla and Najaf, the protesters held peaceful sit-in demonstrations.

More than 350 people were killed and about 15,000 people have been wounded since the beginning of the protests in southern Iraq. The demonstrators are rallying against corruption, low living standards, and unemployment.