Supergirl Star Melissa Benoist Opens Up about Her 'Abusive Relationship' 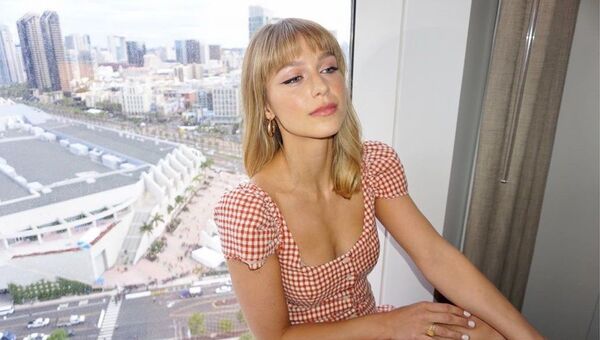 CW’s Supergirl star Melissa Benoist has spoken out about being in an abusive relationship - saying at one point she had to learn to lock herself in a room – yet also opened up about how to get out.

In a video, which is captioned Life Isn't Always What It Seems, the actress provided details of how the "violence escalated" and how she "had to get out." She didn’t name the alleged perpetrator or indicate when the relationship took place or how long it lasted.

The star of the CW superhero show said  "the abuse was not violent at first," but was more manipulative: her partner was extremely concerned with what she was doing during her job.

"He didn't want me ever kissing or even having flirtatious scenes with men..." she said, adding that she had to turn down auditions and job offers because she "didn't want to hurt him," and now sees that behaviour as a "red flag" for what was to come.

The 31-year-old says the violence started with "a smoothie being thrown in my face" before escalating to the point where she was "pinned down, slapped and repeatedly punched."

"I learned to lock myself in rooms but quickly stopped because the door was inevitably broken down," she says, adding that her "most vivid memories" are arguments ending when "a wave of guilt would wash over him" and he'd "carry me to an empty bath" before crying and giving what she calls "the typical abuser's apology speech."

Melissa says she would "just plain lie" to her closest friends to cover up what was going on, until one day one of them finally confronted her about it.

"Unbeknownst to me, many people in my life suspected and feared exactly what was happening. It was the first moment I spoke about the abuse to anyone and I can't describe the amount of relief I felt. She held me and she said, 'You know what you have to do now, don't you?'" she said.

The actress says "leaving was not a walk in the park," but the more people she trusted with her story more confident she got to move forward.

"What I went through caused a tectonic shift in my outlook on life. I will be healing from this for the rest of my life. And that's OK. If you are enduring what I went through and you see this... at least you might begin to think of your freedom. You can and deserve to live a violence-free life," she said at the end of the video.

Netizens showed support for her story with #IStandWithMelissa, calling her story "absolutely heartbreaking" while praising the actress for being "so strong" and thanking her "for being yet another voice to say it's OK to say no."

Other celebrities have also supported her.

Riverdale actress Lini Reinhart said she was "so moved by her bravery" on Instagram, while writer Natasha Rothwell tweeted: "Check on your strong friends. Check on your quiet friends... Check on each other."

Melissa's bravery "will undoubtedly help and encourage others to do the same," said Sandra Horley, chief executive of domestic abuse charity Refuge.