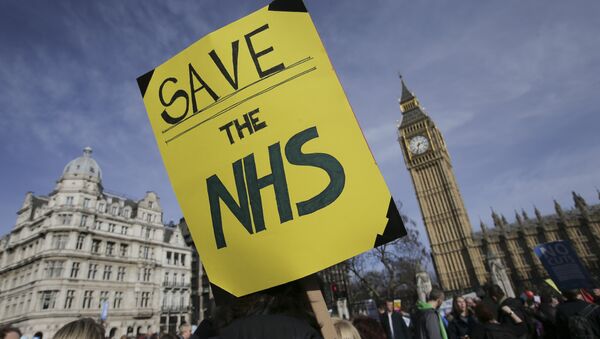 The new revelations could represent a significant blow to the electoral chances of the Conservative Party, which has pledged a major boost in the number of nurses to the NHS to fend off attacks by Labour.

The Labour Party claims, citing leaked documents, that the Tories have been discussing for two years the sale of the National Health Service to US health giants.

The 451-page dossier mentions six rounds of talks that purportedly took place between July 2017 and July 2019, under Theresa May's government. Corbyn claimed the potential deal would drive up the cost of medicines for Britons.

In the past weeks, ​Jeremy Corbyn has accused Boris Johnson of seeking to sell the NHS off to US healthcare firms, which the latter strongly denied. “It is completely untrue,” the prime minister said in a televised debate last week. “There are no circumstances whatever in which this government or any Conservative government will put the NHS on the table in any trade negotiation. Our NHS will never be for sale.”

Channel 4’s Dispatches programme was first to break the story about the secret US-UK meetings on the NHS last month. They apparently learned about the meetings through documents obtained by campaigners via a Freedom of Information request. Dispatches reported that British trade officials had discussed “drug pricing” in the meetings, but were told to refer to it as “valuing innovation” because the subject was too sensitive.

“The uncensored documents leave Boris Johnson’s denials in absolute tatters,” Corbyn declared at the press conference. “We have now got evidence that under Boris Johnson the NHS is on the table and will be up for sale. He tried to cover it up in a secret agenda and today it has been exposed.”

Corbyn, who has faced allegations of anti-Semitism within his party’s ranks for years, recently come under fire from Jewish leaders again. The Conservatives responded to the leaks by claiming that Corbyn was simply trying to divert public attention from the anti-Semitism row and other issues. They said the documents had been online for two months and were simply “readouts”, or briefings, on the meetings of the UK-US Trade & Investment Working Group. Boris Johnson reiterated following the conference that there were "no circumstances" under which the NHS would be up for sale.

International Trade Secretary Liz Truss said of Corbyn: “People should not believe a word that he says — this stunt is simply a smokescreen for the fact that he has no plan for Brexit and that he has been forced to admit that he wants to increase taxes for millions of families.”

The prospective NHS sell-off has been discussed in public for quite a while. US envoy to the UK Woody Johnson, a close friend of President Trump, said in June that every area of the British economy, including healthcare, would be up for discussion when the two states brokered a trade deal after Brexit.

Trump reiterated that view days later at a conference with Theresa May, but sparked a backlash among British politicians and was forced to backtrack (publicly) on the plans.