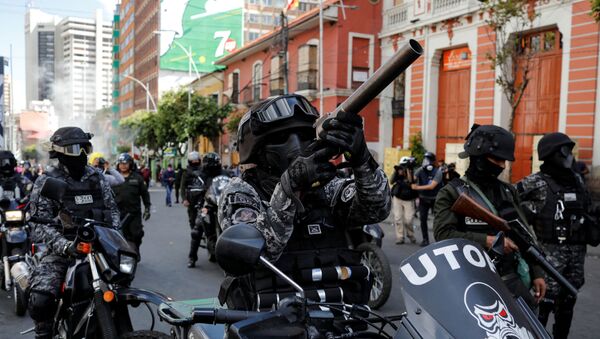 De facto support by Human Rights Watch for the coup in Bolivia makes a mockery of its mild criticisms and reform recommendations for curbing police violence in Chile’s protests. The Tuesday report, which offers no substantial changes to Chile’s violent police force, comes just days after the group’s chief praised Evo Morales’ removal in Bolivia.

Across Latin America, the masses are in motion, pushing back against government attempts at austerity policies from Ecuador to Chile and Bolivia. However, amid the harsh police violence that has killed dozens, injured thousands and jailed still more, the civil rights monitoring NGO Human Rights Watch (HRW) has taken a highly partisan stance that aligns with US foreign policy.

In Chile, where millions have pushed for an end to the neoliberal system installed by a US-backed coup d’etat in 1973, HRW has condemned police violence rhetorically, but their proposed solutions are throwaways, rhetorical slaps on the wrist guaranteed not to be followed or even to be effective if they were implemented. In Bolivia, where the police and military are even more violent than in Chile, but are acting in the service of a US-backed coup d’etat against the indigenous socialist ousted President Evo Morales, HRW has made a series of ambivalent statements that make light of the violent coup, while its chief executives openly praise it.

“Chile’s national police, Carabineros, committed serious human rights violations, including excessive use of force in the streets and abuses in detention, after thousands of Chileans took to the streets on and in the weeks following October 18, 2019,” the New York-based NGO said in a Tuesday report.

The group met with Chilean President Sebastián Piñera on Tuesday, presenting a series of recommended reforms aimed at curbing the violent excesses by police against demonstrators. Piñera, it should be remembered, declared barely a month ago that the Chilean state was “at war” with the rising protest movement.

By November 21, the National Human Rights Institute had filed 442 criminal complaints with the Chilean government about injuries, abuse and torture, rape, killings and attempted killings allegedly committed by the police and military since the protests began last month.

The report found damning evidence of unprovoked uses of force and of excessive force by security forces, leading to more than 11,500 injuries since the protests began. Shotgun pellets had caused more than 220 eye injuries, resulting in dozens of people losing sight in at least one eye; beatings, bean bag grounds, tear gas cartridges, and even motor vehicles were all found majorly responsible for protester injuries and deaths.

As of Tuesday, the country’s attorney general was investigating 26 deaths in connection with the protests. In addition, more than 15,000 people have been arrested.

“There are hundreds of worrying reports of excessive force on the streets and abuse of detainees, including brutal beatings and sexual abuse, that should be promptly and thoroughly investigated to ensure victims’ access to justice,” José Miguel Vivanco, Americas director at Human Rights Watch, said in the report.

“Issues such as the indiscriminate and improper use of riot guns and shotguns, abuse of detainees in custody, and poor internal accountability systems gave rise to serious violations of the rights of many Chileans. This is precisely why police reforms are urgently needed.”

However, HRW offers no real solution to these problems apart from the obvious. Among HRW’s recommendations to Piñera are the suspension of pellet shotgun use, installing cameras in all areas of all police stations, and more research into less lethal weaponry.

However, where the mask truly slips is in HRW’s response to the violent seizure of power by right-wing forces in Bolivia, which the New York-headquartered group has refused to acknowledge as a coup d’etat and which the group’s executive director has praised.

Vivanco has claimed that Morales’ departure from the presidential office and the country on November 10 simply followed “weeks of civil unrest and violent clashes,” ignoring actions by the police, military, and right-wing militias who effectively rendered Morales’ resignation at gunpoint, Mint Press News’ Alan MacLeod reported.

The group’s official statement the day after the coup, November 12, simply states that Morales “traveled to Mexico” after the Organization of American States report accusing him of electoral fraud was released, even though he agreed to hold new elections in light of the accusations. There is no hint of military, police, or other threats against him.

However, HRW’s executive director, Kenneth Roth, went still further, sharing an Economist article rejecting the idea it was a coup, writing in the caption that Morales was a “strongman” and that the coupists were a “counter-revolution aimed at defending democracy” that happened because “the army w/drew its support because it was not prepared to fire on people in order to sustain him in power."

The most important thing now in this transitional moment for Bolivia is ensuring that authorities reestablish the rule of law and protect fundamental rights, including to protest peacefully and to vote in transparent, competitive, and fair elections. https://t.co/ayWcCKdedS pic.twitter.com/WdxFmxEuhw

​Roth also called the coup a “transitional moment,” calling on the new government to “reestablish the rule of law and protect fundamental rights,” even as the military and police were shooting protesters, torching the houses of Morales’ family members, and blocking senators from Morales’ Movimiento al Socialismo (MAS) party from entering the Senate to perform their duties as lawmakers.

HRW’s second report, on November 19, was even weaker than its Chile report in criticizing the coup government of Interim President Jeanine Áñez, saying they “should repeal” an incredible decree establishing military rule and suspending civil rights for protesters, journalists, and others.

Vivanco said he was “extremely concerned” by the measures, saying the government’s “priority” should be on protecting rights.

In extremely telling language, HRW mentions that nine were killed and 122 wounded in a demonstration in Sacaba on November 16 - but never mentions that it was the police who did the killing and the protesters who were injured and killed. The same tweet linked to by HRW citing that figure, a post by the Inter-American Commission on Human Rights, explicitly faults “the combined repression of the police and armed forces.”

Instead, HRW quotes UN High Commissioner for Human Rights Michelle Bachelet, who made the more ambiguous and uncertain statement November 16 that the deaths and injuries “appear to be the result of unnecessary or disproportionate use of force by the police and army.” Bachelet has similarly painted over violence by US-backed right-wing forces in Venezuela, issuing a report in July that completely omitted the UNCHR’s research into victims of right-wing protesters’ attacks.

McLeod noted that Vivanco’s own report on Venezuela in 2008 was immediately and widely panned by regional experts because it “did not meet even the most minimal standards of scholarship, impartiality, accuracy, or credibility.”

This is to be expected, HRW having been founded in 1978 as Helsinki Watch and aimed explicitly at “watching” the socialist Eastern Bloc states’ compliance with the non-binding Helsinki Accords. As it ignored similar human rights violations by the US and its allies around the globe, Helsinki Watch was blasted as hypocritical in its nonpartisan posturing.

Some useful comparisons can be found between HRW’s language in Chile and post-coup Bolivia and that used in Bolivia under Morales and in Venezuela.

For example, when Morales announced in November 2017 that he would seek a fourth term - to which he was elected on October 20, 2019 - since the Supreme Electoral Tribunal ruled denying him the chance to run was also a denial of his human rights, Vivanco called it “just another reach for autocracy” and accused Morales of being “obsessed with staying in power.”

Like Bolivia, HRW refused to call Juan Guaidó’s attempted power grab a coup, although it did acknowledge that some had done so. Instead, it focused its January 25 report on Venezuela purely at the government of President Nicolás Maduro, saying Venezuelan officials “should be held accountable” if they use “similar repressive tactics” to put down the attempted coup as they had previous US-backed uprisings in 2014 and 2017.

In an October report also published in Foreign Policy, Roth attacked Maduro’s government, which was seeking a seat on the UN Human Rights Council, as “corrupt and oppressive” However, when forced to admit that Brazil was the only other Latin American nation to seek membership on the council, HRW called Brazil’s fascistic leader Jair Bolsonaro, who took power in truncated elections after the courts deprived him of a meaningful adversary when it ruled jailed former President Luiz Inácio Lula da Silva was ineligible to participate, simply “controversial.”

Despite this, HRW and its leaders have not called for Piñera or Áñez to be removed from power. They haven’t been accused of being power-hungry and their countries have not been denounced as repressive deprivers of human rights by the supposed “watcher” of human rights. Instead, they’ve been given polite advice about generic accountability reforms and about “restoring the rule of law.”

The tone adopted and the message being sent is that while Piñera’s and Áñez’s right-wing governments are making errors, they are still fundamentally on the right track and require nudging back towards more acceptable policies. By comparison, Morales and Maduro are enemies of freedom with whom one cannot reason, and when they are inevitably removed from power, it will be for the good the people and the restoration of democratic norms.

In other words, exactly what the US State Department says.