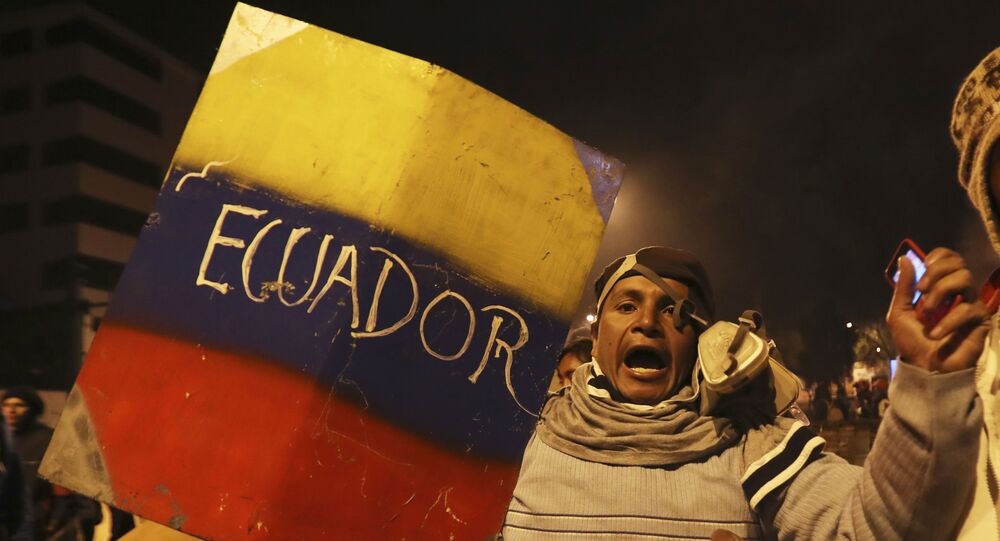 Approved by Washington, Quito’s decision to roll back austerity cuts to fuel subsidies in the wake of massive protests led by indigenous people could be an attempt to do nothing more than weaken a growing revolutionary movement in Ecuador, an expert told Sputnik Tuesday.

In a Sunday agreement between Ecuadorian President Lenin Moreno and leaders of the country’s indigenous peoples, the government agreed to reinstate fuel subsidies to halt mass protests in the country that have killed eight people and wounded more than 1,000.

However, it’s unclear if the agreement was a move by Moreno to simply diffuse the movement, Arnold August, an author and journalist currently on an international speaking tour on the theme "US-Venezuela-Cuba-Canada Relations: The Geopolitics,” told Radio Sputnik’s Loud & Clear Tuesday.

“In the media here in Canada, pretty much like in the US, there was a complete blackout during that uprising in Ecuador that lasted almost 10 days. But watching very closely my usual sources … to me, it was a major uprising of historical importance … Because it seemed like the movement was on the upswing, on the offensive … While the negotiations were going on, the Moreno government actually increased its suppression against the followers of [former Ecuadorian President] Rafael Correa,” August told hosts Brian Becker and Walter Smolarek.

In recent weeks, thousands have rallied across the country against the government's economic reforms, particularly the decision to curb decades-old fuel subsidies. Moreno has accused supporters of his predecessor, Correa, of fueling the protests and has repeatedly claimed that Ecuador can no longer afford the subsidies, which, if cut, could help the country save some $2.27 billion a year.

The cuts were also part of the Ecuadorian government's deal with the International Monetary Fund (IMF) to become eligible for a $4.2 billion loan, Sputnik reported. In addition to cutting subsidies, Moreno’s government has a wider plan to lay off employees from state-owned companies and privatize its state-owned telecommunications provider, CNT, as part of its austerity measures.

However, during a nationally broadcast negotiating session Monday, Moreno and leaders of indigenous groups, including Jaime Vargas, the president of the Confederation of Indigenous Nations, agreed to cancel the decree on fuel subsidy cuts.

“Very suspicious that immediately after the agreement was made, the US State Department lauded that, ‘Oh, this is great. We are really happy with this agreement. Now there will be peace in Ecuador.’ So, without jumping to conclusions too easily, I think it means something with the State Department happy with an agreement,” August said.

“One of the main reasons is that despite the good aspects - it stopped the bloodletting, and it forced Moreno to temporarily take away that decree that angered so many people - the question still remains: Was this a move inadvertently to diffuse the movement, which is becoming extremely revolutionary and a real danger to the status quo? Not just the International Monetary Fund, the ruling elite in Ecuador were threatened by the people, and this was put on the backburner for a few minutes,” he explained.

Ecuador Is a Time Bomb: How Long Will the Crisis Last?

Inside Look: How Ecuador’s Capital Has Turned Into a Battlefield