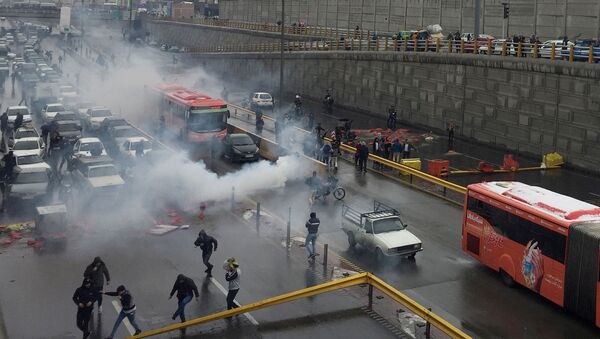 Oleg Burunov
All materialsWrite to the author
Earlier this month, Iran’s state-owned National Oil Company increased petrol prices by up to 50 percent, in a move that caused violent protests across the Islamic Republic, where dozens were detained over acts of vandalism and attacks on police officers.

“During recent riots, some of our neighbours acted against [good] neighbourly relations and the stipulations of Islam and committed acts of mischief. We advise [those] neighbours to repent”, he told a group of female Basij militia members in Tehran on Sunday as cited by Press TV. He did not elaborate.

Fadavi promised to respond in kind to what he described as enemies' moves in the recent riots, adding, “if we wanted to make use of various capabilities of the Islamic Revolution, we were able to meddle with the most trivial issues of any country, but we will not do so because Islam does not allow that.”

The statement comes a few days after Iranian First Vice President Eshaq Jahangiri warned “certain regional countries” that they will face problems if proof pertaining to their involvement in the Iran riots is obtained.

They “should know that if clues are found that show they intervened to create unrest inside Iran, they will see no peaceful time in the region,” Jahangiri said.

He spoke after the Iranian Foreign Ministry summoned Swiss ambassador to Iran Marcos Leitner, who represents Washington’s interests in the Islamic Republic, over comments by US Secretary of State Mike Pompeo in connection with protests against hikes in petrol prices in Iran. The ministry described Pompeo’ statement as interference in Iran's domestic affairs.

On 16 November, Pompeo tweeted an appeal to the protesters, saying “to the people of Iran” that “The United States is with you,” and accompanying his post with a year-old message about “the proud Iranian people…not staying silent about their government’s abuses.”

White House spokeswoman Stephanie Grisham said a statement at the time that Washington “supports the Iranian people in their peaceful protests against the regime that is supposed to lead them”.

Iranian parliament speaker Ali Larijani harshly condemned Washington’s stance, saying that “the US’s goal vis-à-vis Iran is nothing other than to disturb its security and set fire to the Iranian nation’s interests”.

One killed in petrol protests in #Iran.
Protests broke out across Iran against gov't decision to hike gasoline prices.
📸 pic.twitter.com/a2W6Ke8Ofi

Mass protests erupted across multiple Iranian cities in mid-November after the government announced that it would increase gasoline prices by at least 50 percent in order to save resources as the country grapples with the impact of US sanctions pressure.

About 40 people were detained in the central Iranian city of Yazd during the protests, with  prosecutors saying that those detained were charged with committing acts of vandalism, attacking police officers and causing bodily harm to them.

US Economic Sanctions Against Iran