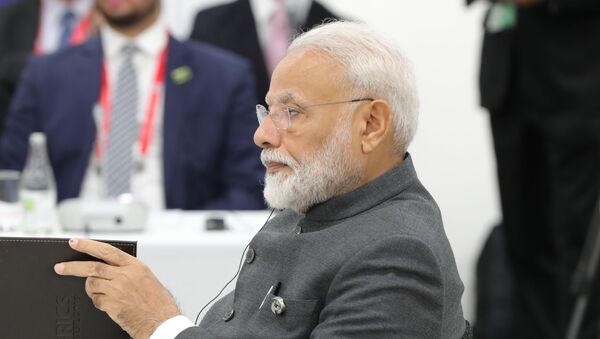 New Delhi (Sputnik): Despite the popularity of Indian Prime Minister Narendra Modi, during his visit to the southern state of Tamil Nadu in October to receive Chinese President Xi Jingping at an informal summit, there was a trending campaign on Twitter saying #GobackModi.

A Twitter backlash rallying around the hashtag #GoBackModi has erupted during Modi’s election campaign in the eastern state of Jharkhand, where elections are scheduled to kick off on 30 November.

The present trending hashtag is also a protest against failure of the ruling Bharatiya Janata Party’s (BJP) government to fulfil the promises it made during the provincial legislature elections in 2014.  The affiliation of the twitter users of this campaign, however, was not known.

We want job , not your Jumla and Fraud Modi !#GoBackModi pic.twitter.com/vN61TvK76D

The Scheduled Caste (SC) and Scheduled Tribe (ST) students, who were paying Rs 375 earlier, will now pay Rs 1200 for five subjects.
Modi is anti-SC and anti-ST..#GoBackModi

We want job , not your Jumla and Fraud Modi !#GoBackModi #GoBackModi pic.twitter.com/5TqFY1tqaO

This is few achievement of Mr Modi. he is not simmion so plz not trend #GoBackModi 😭😭😭

You can clearly understand what is going to happen in this assembly elections in Jharkhand from this picture#GoBackModi pic.twitter.com/kBS8x2t5KI

27% tribal people r in Jharkhand
Santali, Kurukh, Mundari and Ho are their language

Modi aimed to extinct all tribal language by acting

Grammar, Scripts & literature 4 tribal language not given importance by Modi

​The eastern state of Jharkhand will go to polls in five phases from 30 November till 20 December. The main opposition Congress Party has formed an alliance with two parties from the region, Jharkhand Mukti Morcha and the Rashtriya Janata Dal, to take on BJP.

In 2014, the BJP won 43 seats and formed a government along with the All Jharkhand Students’ Union (AJSU), a regional outfit with five members in the provincial legislature.