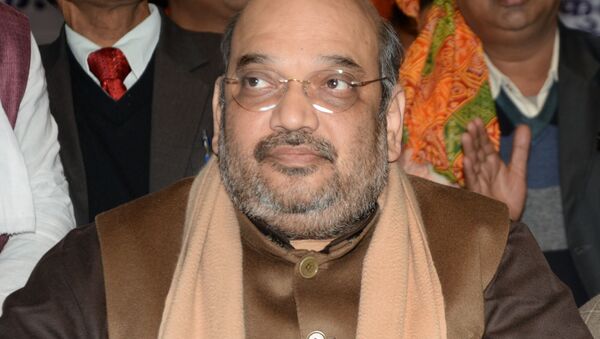 Rishikesh Kumar
All materialsWrite to the author
New Delhi (Sputnik): Amit Shah, 55, India’s minister of home affairs and president of the governing Bharatiya Janata Party (BJP), dropped a surprise bomb Saturday morning when he successfully trounced competitors to place a BJP leader at the helm of one of India’s wealthiest states, Maharashtra.

Belying all speculations in the morning newspaper headlines, Amit Shah, the master strategist of the BJP, once again proved his mettle as Devendra Fadnavis became the chief minister of Maharashtra in an early morning swearing-in ceremony. Until late the other night, speculations were rife that Uddhav Thakeray of the Shiv Sena would become the chief minister, with the Indian National Congress (INC) and the Nationalist Congress Party (NCP) as coalition partners. But at the break of dawn, Indians woke to the surprise of the NCP extending its support to the BJP and not the Shiv Sena and INC, with which it had earlier announced a power-sharing agreement.

This dramatic turnaround, apparently, shows that the BJP’s master strategist Amit Shah was silently working on his Maharashtra plan behind the curtain without sending any hints to the opposition camps, which had met over a dozen times among each other during the last 15 days to find a common ground to form a government.

This is not the first time that Amit Shah has managed to wrest power, taking advantage of a squabbling coalition.

Last month, Amit Shah successfully reinstated the BJP to the helm even after his party did not cross the 50% mark in the 90 seat-assembly in Haryana. With no single party winning the majority, the INC had apparently managed to convince regional parties to cobble up a coalition, making the rampant mob-lynching in the state a point against the outgoing Manohar Khattar-led BJP government. But with Amit Shah leading a night-long marathon meeting with the small parties, the morning of 26 October saw Khattar come back to power by forging an alliance with the Jannayak Janta Party (JJP) and others. The JJP, led by Dushyant Chautala, was earlier willing to go with the INC, which failed to convince him to give up certain demands.

Despite the loss in the Karnataka assembly election in May 2018, Amit Shah supported the government formation in the state under the leadership of party veteran B.S. Yeddyurappa. However, this decision went wrong for Shah, as Yeddyurappa had to concede defeat even before going to a trust vote. Soon after Yeddyurappa stepped down, the opposition Congress and JD(S) formed a government, but failed to run it for a full term. Shah struck back in 2019 and reclaimed the state, as over a dozen legislators from the opposition camp resigned from their party to support the BJP.

In 2017, Amit Shah surprised the country after the BJP quickly seized power in the tiny coastal state of Goa, despite the INC winning 17 seats (only four seats away from majority) in the 40-member state assembly. The BJP managed to win only 13 seats, but Amit Shah, with the help of his senior party leader Nitin Gadkari, wrested eight legislators from the opposition camp in an overnight game plan and formed a government in the state under the leadership of the then defence minister, the late Manohar Parrikar.

Amit Shah once again outsmarted the INC in the north-eastern state of Manipur as it formed a government despite the latter being short of only three legislators in the 60-member state assembly. BJP, however, had only 21 members in the house, while Congress had 28. With little manoeuvre, the BJP managed to win the support of the Naga Peoples’ Front and the National Peoples’ Party to bring the coalition’s total seats to a comfortable majority in 2017.

The BJP won only two seats in the 80-member legislative assembly in Meghalaya, but that did not stop Gujarat-born Shah from helping his party to outmanoeuvre the INC — which had won a whopping 21 seats — and form a government in the north-eastern state, known for its scenic beauty.

Unnerved by the meagre win of its own, the BJP under the leadership of Shah stitched a mega alliance and secured the support of 34 legislators to form a government.

Left high and dry, then INC President Rahul Gandhi attacked the BJP with the tweet: “With just 2 seats, the BJP has usurped power in Meghalaya, through a proxy. Like in Manipur & Goa, showing utter disregard for the mandate of the people. Obsessed instead with grabbing power, using big money to create an opportunistic alliance. #DemocracyDemonetised".