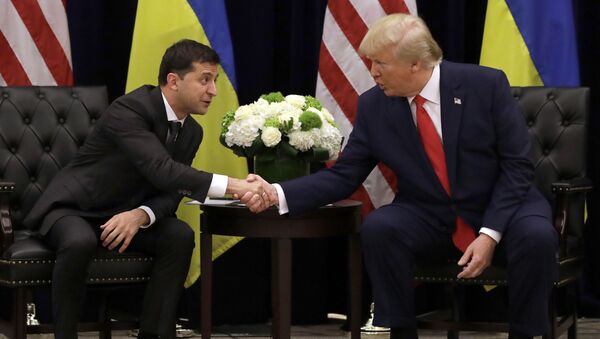 The phone conversation between President Trump and his Ukrainian counterpart Volodymyr Zelensky has been a centrepiece of a Democrat-led impeachment probe against the US president. The Dems allege Trump abused his power by pressuring the Ukrainian president to investigate corruption claims by former Vice President Joe Biden and his son.

The document notes that this is not a verbatim transcript of the discussion and is based on the notes and recollections of the Situation Room Duty officers and NSC policy staff.

US President Donald Trump previously said that he intended to release the transcript of his second phone call with Ukrainian leader Volodymyr Zelensky on Thursday.

In September, US House Democrats launched an impeachment probe into a whistleblower complaint that claimed Trump might have abused the power of his office by allegedly pressuring Zelensky during a 25 July phone call to investigate potential corrupt activities by former Vice President Joe Biden and his son Hunter. Trump allegedly threatened to withhold $400 million in US military aid to Ukraine.

The US president characterised the impeachment inquiry as yet another political witchhunt by Democrats to reverse the result of the 2016 presidential election.