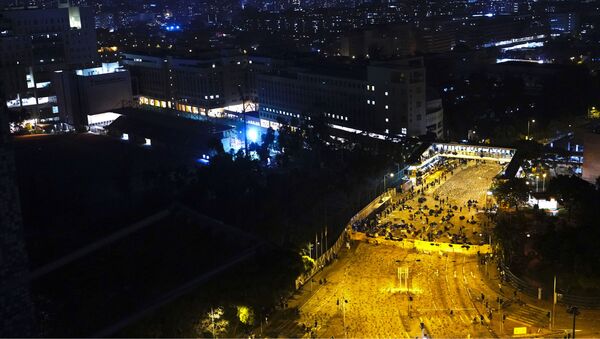 MOSCOW (Sputnik) - Sixty-four people have been admitted to Hong Kong’s hospitals in the wake of the most recent wave of escalation in the Chinese administrative region, media reported, citing the local Hospital Authority, early on Thursday.

The broadcaster RTHK reported, citing the hospital authority that among those hospitalised, 34 people were in stable condition, while 23 people had been discharged and one person was still receiving medical aid.

Media also reported that a man had been found dead after falling from a high structure in Tsuen Wan, a town in Hong Kong’s Western New Territories. The incident has since become a high-profile case but it is unclear if it has any connection to the protests.

Hong Kong has been rocked by violence since Monday. On Wednesday, the police used tear gas and water cannons to disperse protesters. The demonstrators, in response, threw Molotov cocktails and stones and blocked off roads in the area.

The police maintain that they use a proportionate amount of force and only in response to violent acts or illegal behaviour by protesters, despite the protesters' claims to the contrary. Beijing views the situation in Hong Kong as a result of foreign interference in China's domestic affairs and expresses full support for the actions of the local authorities.

Residents of China's special administrative region have been engaged in protests against amendments to current legislation on extraditions. Though the legislation has been abandoned, protesters continue to rally against police violence and call for universal suffrage and an end to legal procedures against fellow demonstrators.