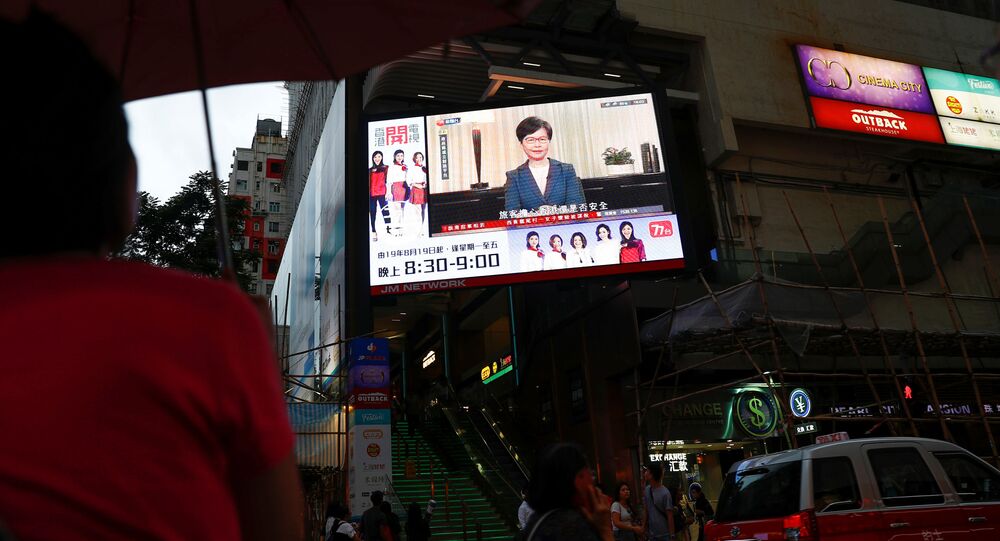 On Wednesday, Hong Kong Chief Executive Carrie Lam announced the government would formally withdraw the extradition bill that was the catalyst for a series of mass demonstrations that have brought about police-protester clashes, arrests and injuries. However, an end to the unrest remains uncertain, as demonstrators have other grievances to address.

“Many would say that we need a common basis to start such a dialogue, and that this has to start with the chief executive,” Lam said in pre-recorded video message to Hong Kong. “The government will formally withdraw the bill in order to fully allay public concerns.”

While the Hang Seng stock index saw a spike of over 3% in afternoon trades following the announcement, many criticized Lam’s move, saying that the bill should have been withdrawn completely weeks ago and that she failed to acknowledge other concerns shared by the protesters.

“Too little, too late,” Joshua Wong, a prominent pro-democracy activist said, as reported by the Asia Times on Wednesday. “We urge the world too to [be] alert [to] this tactic and not to be deceived by HK and Beijing Govt. They have conceded nothing in fact, and a full-scale clampdown is on the way.”

Dr. Joseph Cheng, a political science professor at the City University of Hong Kong, expressed similar sentiments and said that while calling for democratic elections may be “a very tall order” for the government, “even ordinary, moderate Hong Kongers want to see an independent commission of inquiry set up” regarding the police’s use of force.

Unfortunately, Lam has remained unmoved from her previous assertion that the Independent Police Complaints Council investigation will be all that is necessary to investigate the Hong Kong Police Force’s alleged brutality during the past several weeks of protest.

Though there have been only a few deaths directly related to the protests, at least eight activists have also committed suicide during the weeks of unrest, according to Wong’s Wednesday statement.

Sputnik news analyst and producer Walter Smolarek joined Radio Sputnik’s Loud and Clear on Wednesday to present his thoughts on why the bill’s withdrawal failed to move the needle and express what may be going through the mind of the government in mainland China amid these developments.

“It seems like she’s in an impossible situation,” Smolarek asserted to hosts Brian Becker and John Kiriakou. “There’s a confluence of a lot of issues here that can’t be resolved just with a move like the formal, definitive withdrawal of the extradition bill.”

He explained that up the chain of command, Beijing would be wary of allowing too many concessions to protesters, as doing so could prompt uprisings from other secessionists.

Vietnamese-American musician and television producer Trúc Ho, along with a group of Vietnamese-American vocalists, recorded a tune to accompany the mass demonstrations called “Sea of Black.” The tune contains the solidarity lyrics “Hong Kong, land of free, land of you, land of me” and “today Hong Kong, tomorrow Vietnam.”

Though many Vietnamese families fled the country after the US lost the war in 1973 and South Vietnam fell two years later, not all went to the states. Becker pointed out that many ended up in Hong Kong and have remained in the city ever since.

The focus is not on Vietnam and it’s possible pro-democracy marches are to come, but Hong Kong and China’s hesitation to give in to further demands from protesters may stem from their fear of possibly sending a signal to secessionists in other areas of the country and having communist leadership be questioned in general.

“The power of the corporate media is extremely strong,” Smolarek concluded, pointing out how protesters have been aided in their demonstrations and not necessarily demonized by Western media in this particular case. “They’re able to choose who’s the villain and who’s the hero in terms of international affairs, and I think that people need to think for themselves, do their own assessment about what every different force, whatever different organization and leader stands for before coming to a conclusion.”

While Lam may be attempting to put a halt to protests ahead of China’s 70-year celebration of the founding of the People’s Republic on October 1, Adam Ni, a China researcher at Macquarie University in Sydney, said it’s doubtful that just the withdrawal of the controversial extradition bill will make protesters back down.