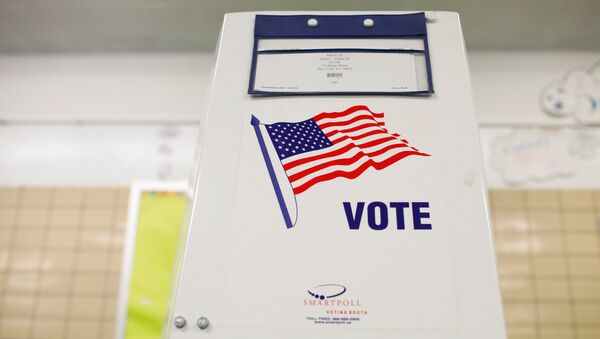 © REUTERS / Andrew Kelly
Subscribe
Tuesday’s state elections in the US revealed interesting results, from an increase in blue votes among suburban women from Virginia through Kentucky, Iowa and Pennsylvania to Democrat Andy Beshear beating Republican incumbent Matt Bevin in the Kentucky governor’s race.

Despite the major gains for Democrats in Tuesday’s elections, the results may not be indicative of how the 2020 election will shake out, Dave Lindorff, an investigative reporter, told Radio Sputnik’s Loud & Clear.

“I would say [it’s] not that it’s a new trend; it’s been a long term trend that’s been happening with suburban women. So, we saw it in the Obama races,” Lindorff told host John Kiriakou, referring to the rise in the number of suburban women voting Democratic.

“The [US President Donald] Trump thing is kind of a fluke; he didn’t win a majority of the popular vote, despite his claims. He won the electoral vote. He significantly lost the popular vote, and so the shift [suburban women voting for Democrats] may even then have been continuing. I'd have to look, but if it didn’t, it was an aberration in that one election, because there has been a long-term trend of suburbs gradually becoming more Democratic because of men - but mostly women - in the suburbs becoming more Democratic.”

“But this should be alarming to Republicans, because it’s happening to Trump, too, and he might have dodged a bullet last time. Women came out big for Hillary Clinton, including suburban women. I think that’s been a trend going on for some time, but if it’s increased, I wouldn’t be surprised, because this is a guy [Trump] who has really dissed women in so many ways that would offend suburban women,” Lindorff explained.

During Tuesday’s election, Democrats took control of the Virginia Senate and House of Delegates. Virginia Governor Ralph Northam is also a Democrat, marking the first time since 1993 the party has controlled all branches of the state’s government.

“Virginia has been [becoming] more Democratic because the population center of the state is close to Washington, which is fairly liberal, so that’s been causing the state to be more and more of a Democratic state. It’s a big deal that Democrats overcame what has been a fairly well gerrymandered state for Republicans for a long time. So the fact that [Republicans] lost this in a kind of election that doesn’t have a high turnout … is fairly significant as an indicator of national trends that are probably happening,” Lindorff explained.

Meanwhile in Kentucky - a red state - Bevin, an unpopular Republican candidate, lost to his Democratic counterpart Beshear by several thousand votes. Bevin has asked for a recanvass of votes.

“With Kentucky, I don't think you can read too much into it. The most you can read into it is courtesy of Donald Trump going there to make him[self] an issue,” the journalist said.

“He went to the state and invested in what people call a ‘considerable amount of political capital’ by trying to nationalize that governor’s race, and there’s a certain logic to it. He [Trump] won the state by 30%, I think, in 2016, and he could go there - big [anti] gun control state, right-wing, largely white state - and [say]: ‘Do this for me,’ which was essentially his campaign speech: ‘Give me a Republcian governor.’ It failed dismally for a guy who won by 30% three years ago … The most significant thing to say about it is it didn’t look good for Donald Trump. As for what the implications for Republicans are overall, it’s not as significant, because as you say, the governor himself was not a popular guy.”

Although there were some anomalies in the elections, they may not say much about what will happen in 2020, since local races have low turnouts with mostly civic-minded people showing at the voting booths, Lindorff said.

“One thing I would say there that when youre looking at an election that’s largely about local candidates, city council, mayors, that kind of thing … first of all, you’re dealing with very low turnouts. So, you’re dealing with people who are more committed politically than the rest of the population …  Most people don’t vote at all, and when they do, it’s in these big national elections like next year. So, you can’t judge too much about the electorate for 2020 what the electorate of a totally off-year election does.”

“One of the reasons for that is that in local elections, people really tend to know the candidates,” he said. “When you get to that granular level in politics, party matters a lot less than what you know about the guy or woman” who is running.