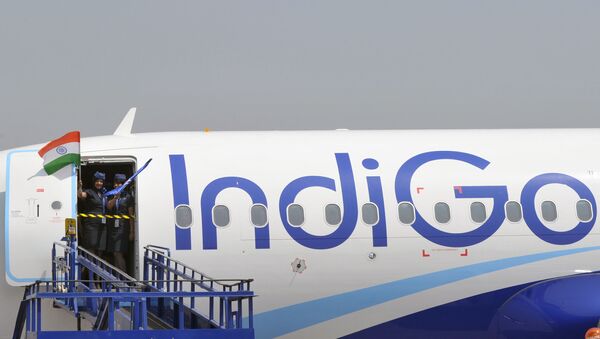 New Delhi (Sputnik): IndiGo is India’s largest passenger airline with a market share of 48.2% as of September 2019. Since India inception in August 2006, the company has grown from a position of owning one plane to operating a fleet of 245 aircraft.

Major chaos reported from various airports across India as servers of the country’s low-cost airline Indigo were down for more than an hour on Monday morning. Travellers complained of chaotic experiences and, long queues at ticket counters while boarding.

In a statement the airline that has share of more than 48% in India’s aviation market said: “Our systems are down across the network. We are expecting the counters to be more crowded than usual. Please bear with us as we try to solve the issue as soon as possible.”

Seating in an #Indigo flight since 2 hours with an infant. The crew is clueless of the issue. #SystemsDown all-india. The struggle ia beyond description @IndiGo6E. Flight me baithke railway wali feeling!!

@IndiGo6E will wait for 25% of its passenger even if they are 1 and 1/2 hrs late. If you're late-lative go for Indigo. People who like to be on time select other alternatives.
In 6E 433 we are still waiting inside the aircraft for others, to kindly join us.

@IndiGo6E ,hello indigo, it's very poor service by you. I m currently sitting in the plane- flight , Kolkata to Mumbai , for more than an Hour, departure time was 10.55 am. getting delayed by your fault. We passengers are suffering.

There is a system failure in indigo, boarding is done manually at terminal 1 Mumbai for flight 6E 298. Departure time being 11:05 n still hasn't taken off yet? What is going on indigo?First u damaging goods in luggage, now flight delay? Loosing trust in indigo @PMOIndia @IndiGo6E

The company, however, did not reveal the cause of the service disruption.

@CaptShaktiLumba Indigo has centralised flight dispatch and briefing. If the system is down across network, I wonder if that is also affected? Just curious on how pilots get briefed when system is down.

Earlier in July this year, a similar kind of server fault was reported by Indigo, which left thousands of passengers stranded at the Bengaluru airport for more than half-an-hour.

IndiGo has a total destination count of 83 with 60 domestic destinations and 23 international routes.

The last few months, the company has been facing difficulties on several fronts including engine issues with  Airbus aircraft.

Last week, India’s Aviation Watchdog ordered it to replace the engines of its entire A320neo fleet of 97 aircraft by 31 January "at all costs" or face grounding.

India’s aviation watchdog the Directorate General of Civil Aviation (DGCA) has also asked the airline to halt the introduction of around 300 Airbus aircraft to comply with the engine replacement deadline.