"I want to be clear, I was not concerned that anything illegal was discussed", Morrison said in his opening statement to the House panels conducting the Trump impeachment inquiry.

Morrison, who was Trump's top National Security Council official on Russian matters, told lawmakers he was concerned that a potential leak of the call could impact the bipartisan support for Ukraine and how Ukrainians viewed their bilateral relationship with the United States.

In his testimony, Morrison also said he and acting US Ambassador to Ukraine William Taylor initially had no reason to believe that the release of security assistance to Ukraine was conditioned on a public statement reopening an investigation into energy company Bursima. However, Morrison said that changed on 1 September after a conversation with US Ambassador to the European Union Gordon Sondland.

The former National Security Council said he hoped the strategy to withhold security assistance to Ukraine was Sondland's own and would not be considered by any leader in the Trump administration or Congress.

Tom Morrison also confirmed media reports that he would step down from his post at the National Security Council once his testimony with House investigators is complete.

In September, House Democrats launched the impeachment inquiry into Trump over his 25 July telephone call with Zelenskyy, during which the US leader is accused of pressing Kiev to probe alleged corruption of Hunter Biden, who was linked to Ukrainian energy company Burisma. The Bidens have said Trump’s allegations are unfounded. 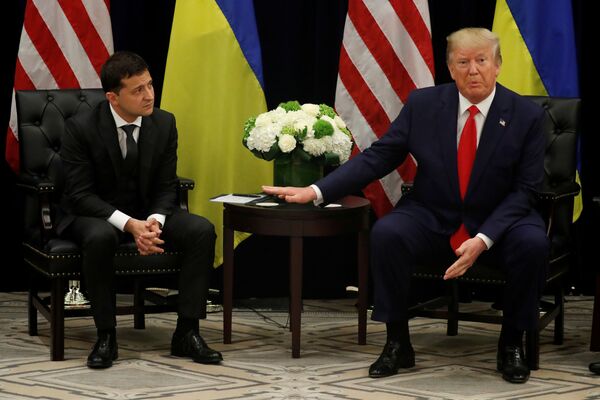 A whistleblower claimed that the White House had attempted to restrict access to the transcript of the call and described it as Trump's attempt to solicit a foreign power’s interference in the 2020 presidential election.

Trump called the conversation "perfect" and described the impeachment probe as another 'witch hunt' designed to overturn the results of the 2016 presidential election.