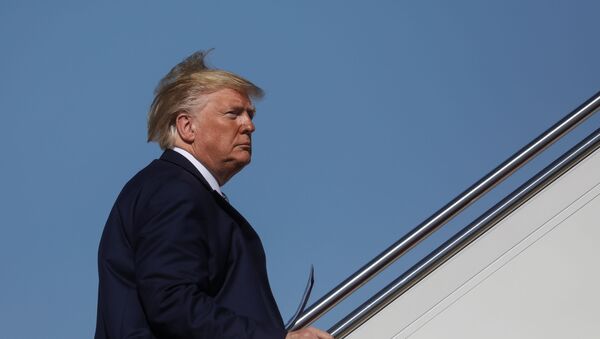 US President Donald Trump announced on Sunday that Daesh* leader Abu Bakr al-Baghdadi, the world’s most wanted terrorist was killed as the result of a US Special Operations Forces night raid on his hideout in northwestern Syria.

According to Trump, Abu Bakr al-Baghdadi was the number one target of the US military for three years. The American president gave details of the terrorist's death saying that "he died like a coward and a dog, running away and crying".

"The Americans announced the killing of al-Baghdadi right now to maximise the advantage of this message in their interests", Iraqi political analyst and strategic expert Ahmed al-Sharifi stated.

"Trump is investing in his election campaign. He especially needs it now, when American troops are modestly and quietly leaving Syria and Iraq. I think that the Islamic State will decline and gradually disappear from the face of the earth", al-Sharifi said.

"The Ministry of Defence does not have reliable information on the conduct of the US military in the Turkish-controlled part of the Idlib de-escalation zone, or on the operation aimed at yet another "elimination" of the former ISIS* leader Abu Bakr al-Baghdadi", MoD spokesperson said.

Daesh Will Hide the Fact of the Leader's Death

Irina Fedorova, a senior research fellow at the Institute for Oriental Studies, at the Russian Academy of Sciences, said that there could be no reliable information on the death of any IS* leader:

"If such an event had occurred or will occur, then it will be classified by the IS* leadership because al-Baghdadi's figure is a symbol that promotes the unification of IS* fighters from different groups. If his killing happens, his companions will do everything possible so that no evidence of this will come to light", she said.

"More important is why the Americans are now talking about his elimination. They need victory, triumph, evidence that they are the best in the annihilation of terrorists", the expert considered.

Irina Fedorova recalled one of the facts of Abu Bakr al-Baghdadi's biography that he was being held in an Iraqi prison controlled by the Americans:

"How was he released, under what circumstances, why? There are a lot of questions and even more speculation", the expert said.

Daesh Will Be Revived in Afghanistan Under a New Leader

Franz Klintsevich, a member of the Russian parliament's upper house's Defence Committee, said he has no confidence that these reports of al-Baghdadi's death are correct, noting that the situation is similar to Barrack Obama's on the eve of the election:

"Here you need to remember that the IS* is a product of Western intelligence agencies and the United States, above all. Now, I think, there is a regrouping of forces. And if al-Baghdadi is really killed, then I am almost sure soon we will hear about the new leader of the IS. Most likely, it will be in Afghanistan", Klintsevich said.

A Fake to Sink Trump

Russian military expert (ret) Colonel Alexander Zhilin, head of the Moscow-based Centre for the Study of Public Applied Problems of the National Security, pointed out that the Americans did not provide any evidence:

"I think that if he [al-Baghdadi] has really been eliminated, this would be confirmed by Israel, which controls everything in the area to the molecule".

"This could've been done both by Trump to raise his ratings and by his opponents. Now Trump is making a lot of statements, and so if a month later al-Baghdadi appears on TV - Trump's rating goes down the drain", retired Colonel Alexander Zhilin concluded.