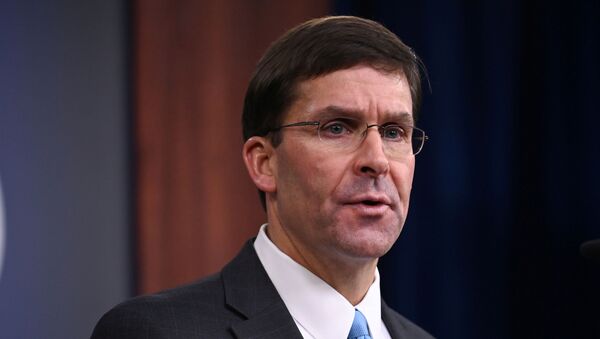 WASHINGTON (Sputnik) - The US troops will deny Russian and Syrian forces access to oil fields it is protecting in northeast Syria, US Secretary of Defence Mark Esper said during a briefing at the Pentagon on Monday.

"Short answer is yes, it presently does, because in that case we want to make sure SDF [Syrian Democratic Forces] does have access to the resources in order to guard the prisons, in order to arm their own troops, in order to assist us with the defeat Daesh* mission", Esper said when asked if US forces will deny Russian and Syrian forces access to the oil fields.

Esper has pointed out that the US forces in Syria will continue to counter Daesh* operations with its partners and further maintain its existing mission to protect oil fields there from the terrorist group.

Earlier at the press conference, he claimed that US forces in Syria would continue to counter Daesh* operations with its partners and further maintain its existing mission to protect oil fields there from the terror group.

Previously, Esper said that the United States intended to take measures in the near future to strengthen its position in Deir Ez-Zor to prevent terrorists from accessing the oil fields.

According to the US defence secretary, the United States is studying how to move forces in the region so as to ensure the safety of the oil fields.

On Thursday, US President Donald Trump proposed letting the Kurdish forces some oil-rich regions in the north of Syria.

On Wednesday, Iraqi Defence Minister Najah Shammari stated the US forces, which the United States withdrew from northern Syria earlier, would remain in Iraq no longer than four weeks.

The statements come after Donald Trump stated that the US forces killed Baghdadi in the Syrian city of Idlib and thanked Russia, Iraq, Syria and Turkey for the relevant help. According to Donald Trump, Russia, in particular, "treated [the US military] great" and opened the Syrian airspace under its control for the US helicopters to find Baghdadi. The Russian Defence Ministry has pointed out that it had not obtained any reliable data about the US operation and had reasons to question the realness of it.