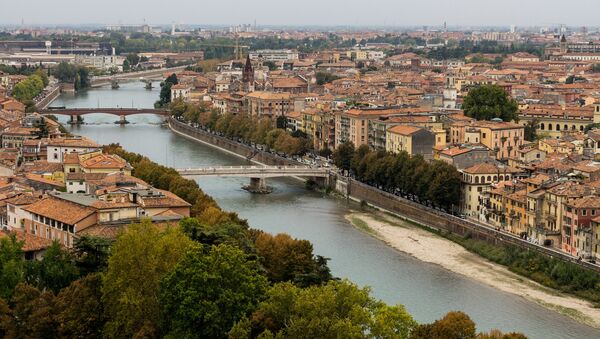 © Sputnik / Alexandr Vilf
/
Go to the photo bank
Subscribe
VERONA (Sputnik) - The 12th annual Eurasian Economic Forum "Business Connecting Eurasia Dialogue - From the Atlantic to the Pacific" kicks off in Verona on Thursday, focusing on a large range of topics with a particular emphasis on the partnership between Europe and the Eurasian Economic Union (EAEU).

The city of Romeo and Juliet will bring together around 60 international speakers, according to the organizers from Italian non-profit Association Conoscere Eurasia and the Roscongress Foundation. Among them will be politicians, heads of business, diplomats and experts.

The Italian government will be represented by Minister of European Affairs Vincenzo Amendola and Minister of Economic Development Stefano Patuanelli.

Other high-level guests of the forum include Mayor of Verona Federico Sboarina and Mayor of Turin Chiara Appendino, the president of the Foundation for Worldwide Cooperation and former prime minister of Italy Romano Prodi, President of Conoscere Eurasia and Banca Intesa Russia Antonio Fallico, Minister of Commerce of the Eurasian Economic Commission Veronica Nikishina, CEO of the Association of European Businesses Frank Schauff, Permanent Representative of Russia to the European Union Vladimir Chizhov and Ambassador of Italy in Russia Pasquale Terraciano.

Several sessions will be devoted to cooperation in oil and gas supplies, which are to be attended by president and CEO of Rosneft Igor Sechin and president of the Eni oil company Emma Marcegaglia, as well as general manager of Gazprom Export Elena Burmistrova, president of the Novatek Management board Leonid Mikhelson and chairman of the Bosphorus Energy Club of Turkey Mehmet Ogutcu.

Trade between Italy and the Eurasian Economic Union — which comprises Russia, Kazakhstan, Kyrgyzstan, Belarus and Armenia — in the first semester of 2019 has shown a growth of 7 percent thanks to the increase in Italian exports to Kazakhstan, according to a press release from the organizational committee of the forum that quotes a report by the Studies and Research Department of Intesa Sanpaolo, specifically prepared for the conference.  Mechanical machinery, textiles, and clothing and electrical appliances are the main items of exports for Italy, while mineral resources remain the primary items of import.

Prior to the conference, Antonio Fallico said that the Eurasian Economic Forum in Verona seeks to recover cooperation with the Eurasian area, which is vital for Italian and European companies. He noted that in Russia, Italy is only 15th among the investor countries, which is a significantly lower than the 5th place ranking occupied by Italy in commercial trade with Russia — a situation which, in his opinion, needs to be improved.

"I think there is a lot of room to improve the trade and economic relationship between Italy and Russia. Of course, there are problems, sanctions, but sooner or later they will be overcome. Anyway, there are signs of improving relations already, and such a broad international event with a lot of countries will be a great occasion to improve our relationship," Fabio Casciotti, director of the Italian Trade Agency, said, when asked about the Verona forum.