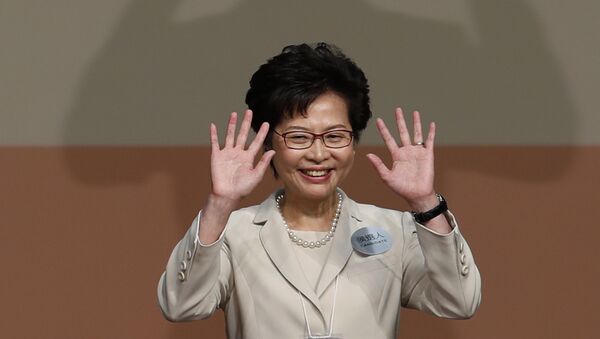 © AP Photo / Kin Cheung
Subscribe
The Chinese government reportedly intends to replace Hong Kong Chief Executive Carrie Lam with a new "interim" chief who will be expected to serve until the 2022 end of her term.

If approved by Chinese President Xi Jinping, China plans to have current Chief Executive Lam resign from office by March 2020, fill her position with an interim chief and have that individual serve until her term's end in 2022, according to a report from the Financial Times citing "people briefed on the deliberations."

The selected interim chief will serve for the remainder of the term, their service will not necessarily roll over into the next five-year period.

Last month, the Hong Kong leader allegedly broke down amid continued police-protester clashes and "unforgivable havoc" within the city.

“If I have a choice,” she said, according to a September 2 report from Reuters, "the first thing is to quit, having made a deep apology.”

Despite Lam's reported emotions, she has continuously condemned violent protests and warned affiliated demonstrators of possible intervention from mainland China.

"I still strongly feel that we should find the solutions ourselves," Lam said on October 2, "but if the situation becomes so bad, then no options could be ruled out if we want Hong Kong to at least have another chance."

While the protests began months ago in response to the Hong Kong government's extradition bill draft, the formal withdrawal of the proposed legislation proved unsuccessful in curbing demonstrations harmful to the public.

In addition to the usual acts of assembly, demonstrations have recently become more violent and the Hong Kong Police Force are increasingly reporting acts of arson, burglary and vandalism in several areas of the city.

With an increase in clashes, riot police are seeing a depletion in tear gas and other necessary equipment previously imported from the US and UK and have become more dependent on mainland China for crowd control gear.