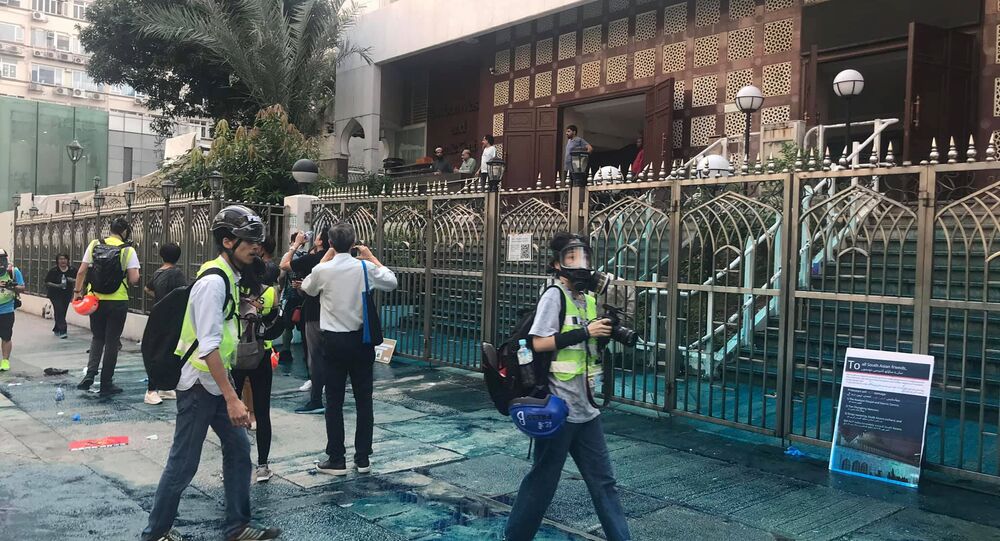 The Hong Kong Police Force (HKPF) met with local imams over the weekend and issued an apology to the city’s Muslim community after officers “accidentally” sprayed the Kowloon Mosque with blue dye during an operation “combatting crimes” carried out by alleged rioters.

HKPF Chief Superintendent Ricky Ho Yun Sing and several other members of the force paid a visit to the Kowloon Mosque late Sunday evening to issue an apology and explain the actions that led up to the moment in which the place of worship was coated in colored water.

“Riotous situation again broke out in a number of districts in Kowloon yesterday (October 20). Rioters extensively set fire and vandalized in multiple locations, seriously endangering public safety,” the HKPF said in a Monday press release. “In response to the situation, Police deployed a Specialized Crowd Management Vehicle to disperse the rioters in the vicinity of Nathan Road. During the operation, colored water was accidentally sprayed at the Kowloon Mosque.”

Prior statements from the HKPF claimed “rioters” had started fires and blocked roads in Mong Kok, Yau Ma Tei and the Sham Shui district. “Unauthorized assembly,” vandalism and road blockages were also reported in the district of Tsim Sha Tsui, where the Kowloon Mosque is located.

Hong Kong politician Jeremy Tam’s Facebook page livestreamed the incident on Sunday and described the scene as an attack on the mosque. The video, which shows protesters, along with the mosque’s steps, sidewalk and metal gate getting doused with blue paint, has amassed over 1.6 million views.

While many Western outlets such as the Washington Post picked up the story and said the individuals were “standing guard” outside the mosque, others contend that the so-called rioters were using the mosque as a way inflaming an anti-police agenda and drawing more criticism toward the HKPF.

Drone footage recorded from an aerial vantage point shows a view of the paint cannon’s range and demonstrators’ movements prior to the spray.

The fiasco at #HongKong Mosque sums up #HongKongProtests in last 3 month:

According to earlier reports from the HKPF, the liquid color fired from the “Specialized Crowd Management Vehicle” is edible and not harmful on its own if only mixed with water. However, this assertion does not take into account the pressure with which it is dispensed. The police force also noted in August that it reserves the right to combine tear gas with the blue dye.

HKPF Commissioner Lo Wai Chung and Chief Executive Carrie Lam met with members of the Incorporated Trustees of the Islamic Community Fund of Hong Kong and “other leaders of [the] local Muslim community” to issue a further-reaching apology.

Hong Kong Police Force
The Chief Executive, Mrs Carrie Lam (second right), together with the Commissioner of Police, Mr Lo Wai-chung (third right), today (October 21) paid a visit to the Kowloon Masjid and Islamic Centre in Tsim Sha Tsui to meet with representatives of the Incorporated Trustees of the Islamic Community Fund of Hong Kong and other leaders of the local Muslim community.

The Muslim Council of Hong Kong described the incident as “careless,” but acknowleged the police’s initial meeting with imams of the Kowloon Mosque as “a noteworthy gesture.”

The Hong Kong Police came to Kowloon Mosque last night to show their concerns over the blue spray hurtful incident. A noteworthy gesture.

Yes, it was careless of them but it’s clear the mosque was not the target, rather the few people standing outside. #PrayForHongKong pic.twitter.com/kCnvOShMug

Video recorded by the Hong Kong Baptist University on Monday showed protesters dressed in black and other individuals assisting in cleanup efforts around and at the mosque.

“Riots” and demonstrations continue amid Hong Kong’s face mask ban, which prohibits the wearing of such gear during public demonstrations and is meant to discourage activity that may be harmful to other members of the public.