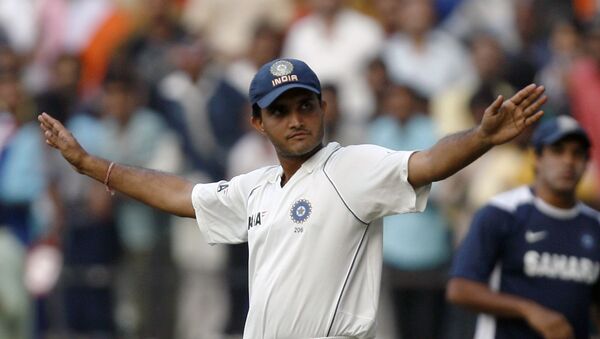 New Delhi (Sputnik) - A popular Indian dairy brand has left people amused by paying tribute to the country’s former cricketer Saurav Ganguly, who is set to take over as the chief of the Indian cricket board.

Since its inception in the 1960s, Amul ads’ blue-haired little moppet in a polka-dotted dress has charmed India with her tongue-in-cheek, sometimes controversial but mostly funny one-liners in advertisements.

Known for using interesting catch-phrases in adverts, Amul (Anand Milk Union Ltd.) has used “Dada kiya to nibhana padega” by twisting a popular old Hindi movie song “Vada Kiya to Nibhana Padega” (or, one has to keep the promise if you have given the word) for its cartoon character.

The latest advertisement shows Ganguly sitting on an office chair with bread and butter in hand while the company’s cartoon girl stands next to him with a bat in her hands as a trophy. Both the characters are dressed formally.

#Amul Topical: The new President-elect of our cricket board! pic.twitter.com/gbdp5QVH3o

​It also adds another line at the bottom saying “Amul Butter Created Completely in India” to relate how legendary batsman Ganguly is akin to India’s biggest dairy milk brand Amul.

Amul’s tribute to the former captain of the men’s Indian cricket team saw a lot of reactions from Twitterati who hailed the "utterly butterly delicious"brand for its “brilliant” cartoons.

The creative team of Amul deserves to be awarded.. Too good.. every time they come up with such unique lines.. Awesome.. Loved this one too.. 😍😍 #SouravGanguly https://t.co/tvH5AEfSRr