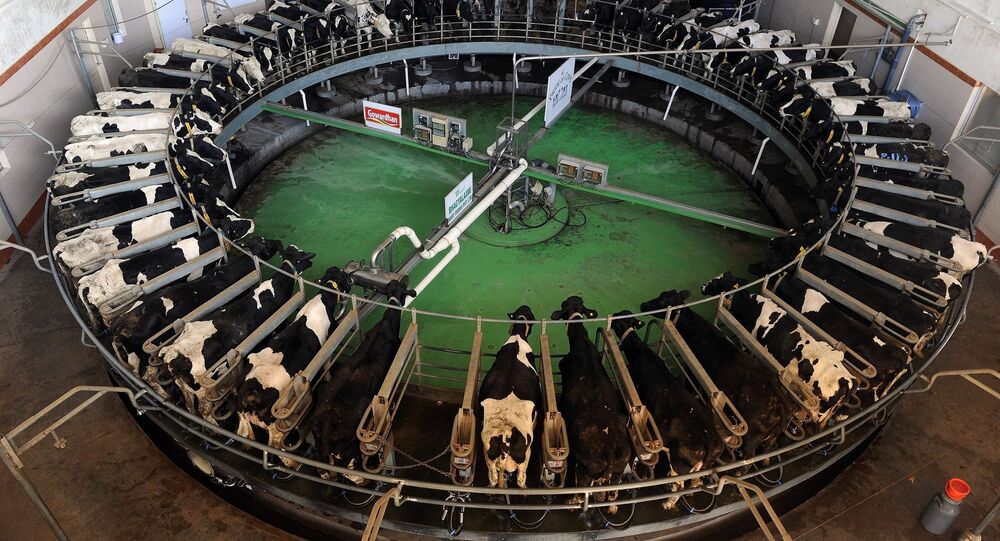 New Delhi (Sputnik): Amid reports of China persuading several Asian countries to seal the Regional Comprehensive Economic Partnership (RCEP) agreement without India, New Delhi has softened its stance on several issues including its reservations against the opening of some crucial sectors including farming and dairy.

An ideological ally of India’s ruling Bharatiya Janata Party has raised strong objections over New Delhi's decision to go ahead with a free trade agreement with the Regional Comprehensive Economic Partnership (RCEP), an economic grouping of 10 ASEAN countries, and six free trade agreement partners. RCEP aims to create free trade zone that includes half of the world’s population and 34% of its global gross domestic product.

The Swadeshi Jagaran Manch or Forum for National Self-Reliance – a sister organisation of India’s ruling Bharatiya Janata Party – warns that signing the deal will destroy the country’s indigenous dairy industry because China, Australia and New Zealand, as well as 10 ASEAN countries, Japan and South Korea, have been lobbying for lower customs duties on dairy products so that they could gain market access to India, which is the one of the largest consumer markets for dairy products.

“It’s unfortunate that officials of the Centre of Regional Trade (CRT) under the Ministry of Commerce and Industry have been supporting attempts to reduce tariffs on milk and its products, by twisting the data of India’s milk production and projecting a huge shortage of milk in India in coming 10 years,” said national co-convener of the Swadeshi Jagran Manch Ashwani Mahajan.

Nevertheless, highly-placed government sources told Spuntik: "We will be going ahead with the deal. Yes, we will keep in mind the concerns raised by several organisations/sectors (small scale industries and agriculture) but at the same time the government informed the industries opposing the deal should invest in research and development to come out of protectionist environment. We cannot wait for the day when small scale industries would become strong to face global peers."

However, Mahajan has accused the government officials involved in the negotiation of “deliberately ignoring” the facts. Citing a report submitted by the government’s policy-making body NITI Aayog in February 2018, Swadeshi Jagran Manch claimed that India will be surplus in milk products by 2033 with a demand of 292 million metric tons against a supply of 330 million metric tons.

“There will be a reduction in procurement prices of milk from farmers due to cheap, imported milk powder from New Zealand. This may result in approximately 50 million rural people losing their jobs as they will be forced to quit the un-remunerative dairying,” Mahajan warned the government, adding that signing the RCEP would mean the death knell for dairy in India.

Earlier in September, commerce ministers of 16 countries agreed that the negotiations should be concluded soon and the result may be announced at the ASEAN Summit which is scheduled to take place in November this year.