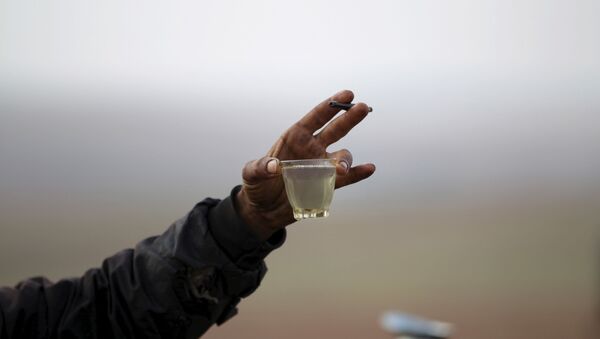 Turkey on Friday agreed to put its offensive against Kurdish fighters in northeast Syria on pause, which Donald Trump said would help the United States “secure the oil” in the Middle East.

US President Donald Trump has made quite a few baffling decisions and statements regarding Syria, and the one about “taking control” of oil in the region due to the cease-fire in northern Syria has left observers looking for explanations.

“We’ve taken control of the oil in the Middle East, the oil that we’re talking about, the oil that everybody was worried about,” Donald Trump told reporters on Friday afternoon as he praised the deal with Turkey.

TRUMP: "We have taken control of the oil in the Middle East -- the oil that we're talking about. The oil that everybody was worried about." pic.twitter.com/0wbew468ec

Trump also brought up the oil in a string of tweets about the five-day break in hostilities in northern Syria. “The US has secured the Oil, & the ISIS Fighters are double secured by Kurds & Turkey,” he tweeted.

The US president was likely referring to the oil fields in eastern Syria, which remain under Kurdish control. This part of the country, once held by Daesh* and since liberated by the formerly US-backed Kurdish militia, accounts for most of Syria’s oil reserves. The United States has so far failed to facilitate the return of these oil-rich territories to the Damascus government.

The fate of local oil and of thousands of Daesh captives held in Kurdish-run makeshift prisons was called into question amid the week-long Turkish operation in northeast Syria against the Kurdish fighters, who are designated in Turkey as terrorists.

This assault prompted the Kurds to quickly strike a deal with Damascus and agree for government forces to take up the territory and prevent the Turkish army from encroaching further into the country.

It wasn’t immediately clear what Trump meant by taking “control of the oil”, and what oil he was referring to, as there has been no word on related developments in Syria and elsewhere in the Middle East. While the Syrian army’s advances in northeast Syria are likely to see Damascus re-establish control over the oil wells, Trump was probably referring to the oilfields seized from Daesh by local militias.

His comments have still caused widespread confusion among journalists and pundits.

Given that I'm a retired US Intelligence officer, I'm very familiar with Middle Eastern oil fields.

What oil fields in Syria has the US secured? Show me THAT oil, the SYRIAN oil secured by the US. Show me that. https://t.co/YfYozaj1tC

I'm usually pretty good at figuring out what Trump might be referring to in public remarks, but right now I'm having trouble reverse-engineering "we've taken control of the oil in the Middle East"

Trump: "We've taken control of the oil in the Middle East."

Not really sure to what he is referring, but he referenced taking control of oil in his tweet earlier today as well.

According to a popular YouTube political commentator who uses the handle Syrian Girl, Trump’s oil comments meant that the cease-fire deal was actually designed to make it safe for US soldiers to “continue occupying Syria’s oil fields”.

Trump admits the ceasefire deal wasn't about protecting the Kurds but making it safe for US soldier to continue occupying Syria's oil fields!
Not because they need #Syria's oil but because Israel doesn't want Syrians to have it. This is why Pompeo went straight to Israel after! pic.twitter.com/fBt8qDpzuN

Nicholas A. Heras from the Centre for a New American Security, a Washington-based think-tank, has interpreted Trump’s comments as suggesting that the US will be “keeping a residual force” in Eastern Syria, perhaps in the Middle Euphrates River Valley.

"The U.S. has secured the Oil..." does that mean the United States is keeping a residual force in E #Syria (MERV)? 🤔 https://t.co/lTvqFYiTXZ

Almost a year after Trump ordered the withdrawal of all US troops from Syria, there are still around 1,000 US soldiers in the country. They’re all expected to re-position to Iraq, Kuwait, and possibly Jordan in the next few weeks, except for a small garrison at Al Tanf military base, near the border with Jordan, which is expected to stay as a counter to Iran’s influence. Given that the US presence in Syria will soon become minuscule, it remains to be seen how Trump will live up to his assertions.

*A terror group outlawed by Russia, the US, the United Nations and many other countries.