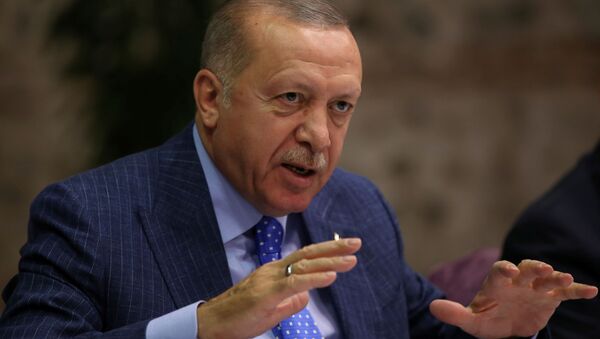 Egor Efimchik
All materials
Donald Trump’s take on the Turkish encroachment in Syria has apparently been unstable: the US president effectively cleared the way for the operation by withdrawing US troops from the area, but later threatened to impose sanctions against Turkey as the offensive went on.

Turkish President Recep Tayyip Erdogan has mocked the speed-tweeting ability of his American counterpart Donald Trump, who has been sending conflicting signals over Turkey’s military operation in northern Syria.

“When we take a look at Mr Trump's Twitter posts, we can no longer follow them. We cannot keep track,” Erdogan told reporters as he was returning from a summit in Azerbaijan, as quoted by Hurriyet, a Turkish daily.

Erdogan appeared to be referring to a series of tweets in which Donald Trump first defended his decision to pull 1,000 US forces from crucial positions in northeast Syria – effectively greenlighting a Turkish operation – and then slapped sanctions on Ankara.

The White House abruptly announced the US pullback on Sunday, 6 October. Three days later, Turkish forces launched an operation against formerly US-backed Kurdish forces across the border with Syria and further inside the country.

The Kurds had until then been key allies of the US-led Western coalition fighting ISIS/Daesh*, but are viewed as terrorists in Turkey, linked to the country's own Kurdistan Worker's Party (PKK), a decades-old insurgency aimed at establishing Kurdish autonomy. The stated goal of the offensive is to establish a buffer zone in the area and accommodate up to 3 million Syrian refugees there who are currently in Turkey. The Syrian government views these plans, as well as the ongoing Turkish offensive, as an aggresive violation of its sovereignty; the international community has been vocally critical about the operation as well.

Trump has long promised to withdraw the United States from military campaigns across the globe, but his latest Syria move has sparked concerns in Washington that it would undermine America’s credibility and bring more chaos to the already-volatile area.

The US president appeared to try to justify his decision in several tweets last week, in which he said that Turks and Kurds “have been fighting forever”. In a follow-up post, however, he promised to “hit Turkey very hard financially” if it “didn’t play by the rules.”

Turkey has been planning to attack the Kurds for a long time. They have been fighting forever. We have no soldiers or Military anywhere near the attack area. I am trying to end the ENDLESS WARS. Talking to both sides. Some want us to send tens of thousands of soldiers to....

Turkey’s military moves prompted the Kurds to quickly reach a deal with Bashar al Assad’s government, whose forces have already entered the Kurdish-held territory that has been outside their control for years to push back against Turkey.

On 14 October, Trump tweeted: “After defeating 100% of the ISIS Caliphate, I largely moved our troops out of Syria. Let Syria and Assad protect the Kurds and fight Turkey for their own land. I said to my Generals, why should we be fighting for Syria and Assad to protect the land of our enemy? Anyone who wants to assist Syria in protecting the Kurds is good with me, whether it is Russia, China, or Napoleon Bonaparte.”

The following day, the US president issued an executive order authorising sanctions against Turkey and blocking negotiations on a mooted $100 billion trade deal. The rationale was that Erdogan’s government must be punished for “endangering civilians and threatening peace, security and stability in the region”.

Speaking to parliament on Wednesday, Turkey’s foreign minister suggested that Trump had gone ahead with the sanctions “under the pressure of domestic factors” and vowed to respond in kind.

*A terror group outlawed by Russia, the US, the UN and numerous other countries.