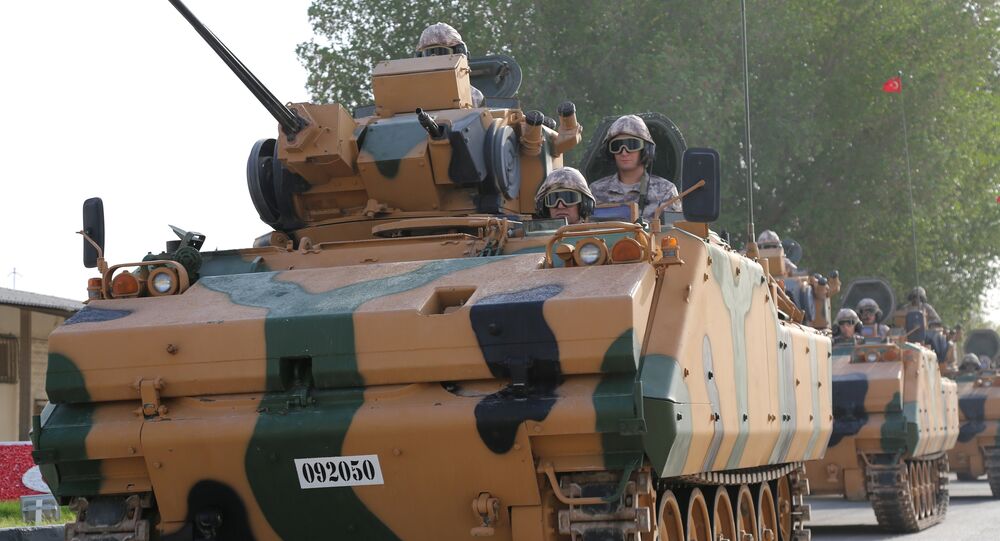 MOSCOW (Sputnik) - The European Union has called on Turkey to end its military operation in Syria's north as individual member states have vocally condemned the offensive, and intends to address the situation, as well as the possible introduction of sanctions on Ankara next week.

On Wednesday, Turkey launched Operation Peace Spring in Syria's north, targeting the predominantly-Kurdish Syrian Democratic Forces (SDF) and the Daesh* terrorist group. Ankara justified its actions by claiming that the SDF are affiliated with the Kurdistan Workers' Party, which Ankara designates as a terrorist organisation.

Soon after the announcement, Turkish troops began advancing into the northern territories of Syria, namely the border towns of Ras al-Ain and Tal Abyad in the Al Hasakah province. On Friday, Turkey's Foreign Ministry said that it has neutralised nearly 350 Kurdish fighters on the third day of the operation, while the Rojava Information Center, an independent advocacy group in northeast Syria, said on Thursday that 11 civilians had been killed in the attack, six of whom were minors.

Additionally, media has reported that an estimated 64,000 people have already fled the area to seek refuge from the advancing Turkish troops, while a total of 300,000 residents in northeast Syria may leave their homes as the operation continues, triggering international concern that the operation will exacerbate Syria's already dire refugee crisis.

Shortly after Ankara launched the attack on Wednesday, High Representative of the European Union for Foreign Affairs and Security Policy Federica Mogherini called on Turkey to cease the operation, saying it undermined progress achieved in Syria by international efforts in the eradication of the Daesh group.

"In light of the Turkish military operation in north-east Syria, the EU reaffirms that a sustainable solution to the Syrian conflict cannot be achieved militarily. The EU calls upon Turkey to cease the unilateral military action. Renewed armed hostilities in the north-east will further undermine the stability of the whole region, exacerbate civilian suffering and provoke further displacements", Mogherini said in a statement.

She added that prospects for establishing peace in Syria, following the seven-year civil war, were also being challenged by the offensive.

Mogherini urged Turkey to use diplomatic means, rather than military action, to address its security concerns in the region and called on Ankara to secure protection of civilians in the area.

"Turkey's security concerns should be addressed through political and diplomatic means, not military action, in accordance with international humanitarian law. The EU continues to urge all parties to ensure the protection of civilians and unhindered, safe and sustainable humanitarian access throughout Syria", the high representative said.

In the following days after the launch of the operation, several EU members spoke out individually to condemn Turkey's actions.

On Wednesday, Germany Foreign Minister Heiko Maas condemned the offensive in the "strongest terms," calling on Ankara to cease the operation and pursue its security interests in a peaceful manner.

French President Emmanuel Macron spoke out on Thursday, saying that the situation could lead to an exacerbated humanitarian crisis in the region, due to the thousands of people suddenly fleeing the combat zone without a designated place to go for a cover.

"I strongly condemn Turkey's unilateral military operation in Syria. I call on Turkey to end it as soon as possible", Macron said at a press conference.

© Sputnik / Str
The Free Syrian Army forces are taking a ride along the Turkish-Syrian border in Akchakala.

"What is happening in Syria — the Turkish offensive, the denial of the rights of the local populations and of the Kurdish people in particular, and killing of civilians — this all is unacceptable, and we cannot look the other way ... Italy, I repeat, condemns the initiative of Ankara, and for this reason a while ago I gave instructions to summon the Turkish ambassador to the foreign ministry", Di Maio later wrote on Facebook.

"We will discuss [possible sanctions against Turkey] at the European Council meeting next week", de Montchalin said on air of the France Inter broadcaster when asked whether France would introduce sanctions on Ankara, adding that EU member states were currently discussing the issue.

The European Council is set to meet from 17-18 October in Brussels.

In a retaliatory tone, on Thursday, Turkish President Recep Tayyip Erdogan warned the EU that Turkey would "open the door" to the 3.6 million Syrian refugees within his country's borders to travel north to European countries if the bloc called the military operation an invasion.

"Nor will we ever accept that refugees are weaponised and used to blackmail us", Tusk said at a news conference, adding that Erdogan's statements were "absolutely unacceptable" and that the EU's main concern was preventing another humanitarian catastrophe happening in Syria.

Syria is still suffering from the world's largest refugee crisis, according to UN figures, with an estimated 5.6 million Syrian refugees in the Middle Eastern region and another 6.2 million Syrians internally displaced in the country.