Has He Been Found? Hunter Biden Steps Down From Chinese Firm Amid Criticism From Trump 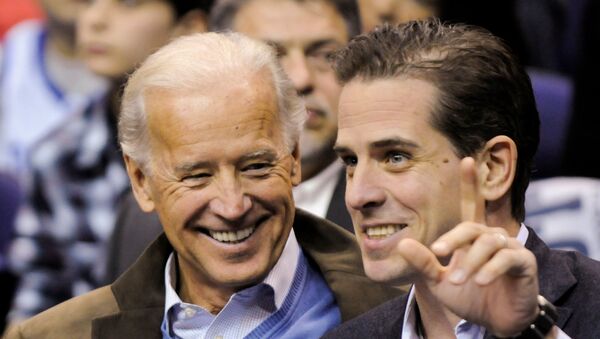 Hunter Biden, the son of former US Vice President Joe Biden, will resign from the board of the BHR private equity fund, which is backed by Chinese state-owned financial institutions, by the end of the month, according to a statement he released through his lawyer George Mesires, as cited by Bloomberg. The media outlet reports that Biden has also pledged to avoid working or presiding over any foreign-based company if his father is elected president in 2020.

The statement, issued on behalf of Hunter Biden, who currently serves on the board of directors of the BHR Equity Investment Fund Management Company, detailed the work that he has done in China and Ukraine and insisted that Hunter’s business activities had not been discussed with his father, a current Democratic presidential candidate, as any conflict of interest would also be avoided in the future.

“Hunter undertook these business activities independently”, Biden’s attorney George Mesires said in a statement. “He did not believe it appropriate to discuss them with his father, nor did he".

“Hunter always understood that his father would be guided, entirely and unequivocally, by established US policy, regardless of its effects on Hunter’s professional interests”, the statement said. “He never anticipated the barrage of false charges against both him and his father by the President of the United States”.

The move comes following Donald Trump’s claims that Hunter Biden was involved in major corruption schemes in both China and Ukraine while his father was vice president during the Obama administration. The US president earlier publically called on Beijing to start investigating the matter, arguing that millions of dollars had been received from China during this time.

In a statement issued on behalf of Hunter Biden, his attorney Mesires countered claims about Biden's alleged acquisition of millions of dollars from China in relation to fundraising activities that his company BHR announced after he flew to Beijing with his father in December 2013, saying that the firm in the end did not raise a discreet pool of capital.

Although it has earlier been reported that Hunter Biden was one of the founders of BHR, which was set up in 2013 to invest Chinese capital outside of China, in the statement he denied having a role in the formation of the company, arguing that his position on the board was unpaid and that he bought a share in the company only in 2017, after his father’s term in the Obama administration had ended.

Biden also previously acknowledged meeting with Jonathan Li, a Chinese banker and his partner in BHR, during his 2013 trip to Beijing alongside his father, but argued that the visit was purely social and devoid of any business discussions.

Hunter Biden was also appointed to serve on the board of directors of Ukraine's Burisma Holdings Group in 2014 while his father Joe was appointed to lead the Obama administration’s policy towards Ukraine. In 2016, then-VP Joe Biden publicly demanded that Ukraine’s Prosecutor General Viktor Shokin be dismissed following his probe into the company’s alleged illegal activities, threatening the Ukrainian government with withholding more than one billion dollars in US aid if the prosecutor retained his post.

Donald Trump and his lawyer Rudy Giuliani have repeatedly said that both Joe and Hunter Biden should be investigated over the general prosecutor’s dismissal. However, the statement issued by Biden’s lawyer dismissed accusations that Hunter and his father were involved in the matter.

“Despite extensive scrutiny, at no time has any law enforcement agency, either domestic or foreign, alleged that Hunter engaged in wrongdoing at any point during his five-year term”, the statement from Biden’s lawyer reads.

Joe Biden has previously avoided responding to questions about the possible conflict of interest that his deep involvement in Ukrainian politics at the time of his vice presidency and his son's business dealings in Ukraine could have entailed.

Meanwhile, on 24 September, House Democrats launched an impeachment inquiry into Trump’s 25 July telephone call with Ukrainian President Volodymyr Zelensky, where he mentioned the case of firing Ukraine’s general prosecutor in 2016. The inquiry was launched after a whistleblower sent a complaint to Congress alleging that Trump had threatened to withhold military aid to Ukraine if Kiev failed to probe the alleged illegal business activities of the Bidens in the country, a claim which, however, was not substantiated by the transcript of the conversation that was later released by Trump. The US president has repeatedly condemned the ongoing inquiry, calling it a “witch hunt”.

Has Hunter Been Found?

Donald Trump personally brought up Hunter during a presidential campaign rally in Minnesota this week, asking about his low profile during his father’s campaign.

“Whatever happened to Hunter? Where the hell is he?” Trump asked the crowd. “Let’s do another t-shirt. Where’s Hunter?”

Several hours after the statement by Biden’s lawyer was released, Donald Trump made a Twitter post where he again questioned the disappearance of his rival’s son, while saying that it “looks like he has raided and scammed even more countries”.

Where’s Hunter? He has totally disappeared! Now looks like he has raided and scammed even more countries! Media is AWOL.