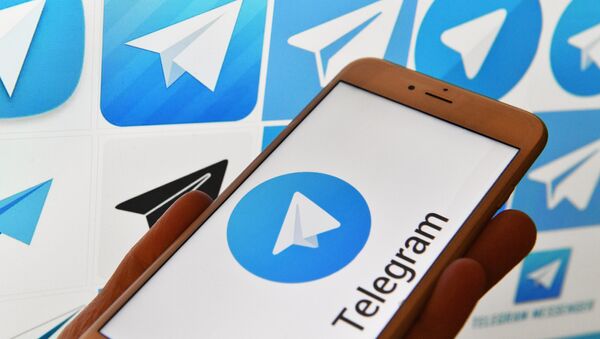 © Sputnik / Natalia Seliverstova
Subscribe
Just two months after the shutdown of message board 8chan, online platforms such as Telegram are apparently becoming the new communities of refuge for radicalized individuals.

Imageboard website 8chan has been offline since it was implicated in the August 3 mass shooting at a Walmart in El Paso, Texas, that killed 22 individuals and injured 24 others. While there have been hints the website’s administrators are planning a return of the board under the name “8kun,” a lot of users have already moved on and made themselves at home on other websites and services.

According to the group’s research, 65 “extreme-right-wing” Telegram channels have seen an average user growth of 43% within the month.

“Telegram was known as a place to access Islamist extremist content, and frankly it still is,” Oren Segal, head of the Anti-Defamation League's (ADL) Center on Extremism, also explained to the outlet. “But white supremacists have been catching up to their Islamist extremist counterparts on all platforms over the past several years.”

Furthermore, a recent investigation published by VICE News revealed that out of 150 far-right groups the outlet analyzed on Telegram, more than 100 were created in 2019. “The dynamics of white nationalism on Telegram in the last two years mirror how the rhetoric and actions of far-right extremists have intensified in real life,” the outlet asserted in the October 7 article.

Although Jim Watkins, owner of 8chan, was called to testify before Congress due to the “extremist content” on his website, the board’s Twitter page has been teasing its return under a new moniker: 8kun.

The US federal government has expressed outrage over the website over its relation to not only the El Paso massacre, but also the March 15 Christchurch, New Zealand, massacre and an April 27 attack on worshippers at a synagogue in Poway, California.

“We’ve seen terrorists post 8chan links to Facebook in an effort to bring widespread attention to mass shootings,” Rep. Max Rose (D-NY), chair of the Homeland Security Subcommittee on Intelligence and Counterterrorism, said in a September 18 release. “We all need to do more to combat the spread of terrorism and keep our communities safe — Congress, tech companies — everyone.”

However, the US government’s inability to block Watkins’ website’s return or do more to prevent other social media platforms from providing meeting places for extremists and white nationalists bodes poorly for its chances of passing concrete regulations to curb the potential for future violence.

000000
Popular comments
Last year about 250, 000 Americans died of medical malpractice ........What can we do ? What can Congress do ?
highball
9 October 2019, 23:39 GMT
000000
I do not support racists but this is what people will do, they will communicate where they can in private. States use the simplistic argument that to stop people doing bad things there can't be any privacy in communications. Not having privacy is unnatural, it causes people to be stressed and to alter their behaviour so as to appear to fit in. The last thing needed is more subterfuge.
ian
10 October 2019, 02:50 GMT
000000
Newsfeed
0
New firstOld first
loader
LIVE
Заголовок открываемого материала
Access to the chat has been blocked for violating the rules . You will be able to participate again through:∞. If you do not agree with the blocking, please use the feedback form
The discussion is closed. You can participate in the discussion within 24 hours after the publication of the article.
To participate in the discussion
log in or register
loader
Chats
Заголовок открываемого материала
Worldwide
InternationalEnglishEnglishMundoEspañolSpanish
Europe
DeutschlandDeutschGermanFranceFrançaisFrenchΕλλάδαΕλληνικάGreekItaliaItalianoItalianČeská republikaČeštinaCzechPolskaPolskiPolishСрбиjаСрпскиSerbianLatvijaLatviešuLatvianLietuvaLietuviųLithuanianMoldovaMoldoveneascăMoldavianБеларусьБеларускiBelarusian
Transcaucasia
ԱրմենիաՀայերենArmenianАҧсныАҧсышәалаAbkhazХуссар ИрыстонИронауОssetianსაქართველოქართულიGeorgianAzərbaycanАzərbaycancaAzerbaijani
Middle East
Sputnik عربيArabicArabicTürkiyeTürkçeTurkishSputnik ایرانPersianPersianSputnik افغانستانDariDari
Central Asia
ҚазақстанҚазақ тіліKazakhКыргызстанКыргызчаKyrgyzOʻzbekistonЎзбекчаUzbekТоҷикистонТоҷикӣTajik
East & Southeast Asia
Việt NamTiếng ViệtVietnamese日本日本語Japanese中国中文Chinese
South America
BrasilPortuguêsPortuguese
NewsfeedBreaking
19:40 GMTWomen's Tennis Association Suspends Tournaments in China Due to Situation With Peng Shuai
19:27 GMTSuspected Michigan School Shooter to Be Charged With Terrorism, Four Counts of Murder
19:21 GMTAmerican Author Alice Sebold Apologises to Man Cleared of Her Rape After Spending 16 Years in Jail
19:15 GMTControversy Over Messi's Ballon d'Or Win Escalates as Ronaldo Backs Claims That PSG Ace Stole Award
19:13 GMTVideo: Russian Scientists Unveil Biomedicine Application for Shape-Memory Alloy
19:06 GMTMacron Calls BoJo 'Clown' With 'Attitude of Good-For-Nothing', French Media Claims
18:59 GMT'UFO Cloaked Inside Cloud' Spotted Above Florida, Blogger Claims
18:48 GMT'Sending a Message': Space Force General Claims US Satellites Are Attacked on Daily Basis
18:47 GMTCalifornia Health Officials Identify First Case of Omicron Covid Variant in United States
18:33 GMTRepublicans Fear 'Civil War' in Wake of Ilhan Omar Scandal, Voice Concerns About 2022 Midterms
18:05 GMTDeath Toll From Michigan High School Shooting Rises to 4
17:05 GMTWhat Pushed Donald Trump to View US Intelligence Community With Suspicion During His Tenure
16:42 GMT'Melding of Services': Australia Won’t Lose ‘Sovereignty’ Under AUKUS, says Biden’s 'Asia Tsar'
16:42 GMTIndia's Top Car-maker Maruti Suzuki's November Sales Down 9% On Chip Shortage
16:23 GMTMassive 'Potentially Hazardous' Asteroid 'Taller Than Chrysler Building' To Approach Earth Next Week
15:38 GMTUK Parliament Reportedly on Lockdown After Man Cycles Through Security Gates - Photos
15:34 GMTUS School Shootings on the Rise After Pandemic-Caused Hiatus
15:23 GMTDominic Raab Under Pressure To Bring In UK Child Cruelty Register After Approving ‘Tony’s Law’
15:08 GMTRonaldo's Bodyguards Investigated in Portugal Over Suspicion of Illegal Work – Report
14:46 GMTAnother UK Energy Supplier Pushed Out of Market by High Gas Prices