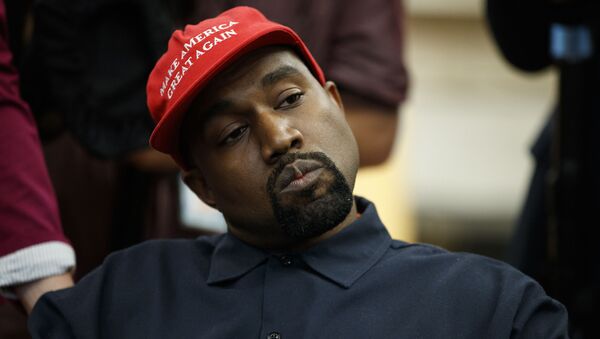 Rapper Kanye West once again defended his support of President Trump, arguing that it's "mental slavery" to make decisions or vote based on skin colour, arguing that the Republican Party freed the slaves during the US Civil War.

"That's the Republican Party that freed the slaves," West said on Saturday during his Sunday Service session in Salt Lake City, Utah, pointing to the fact that President Abraham Lincoln, who was a Republican, was in office when slavery in the United States was abolished.

"And we got the right, right? We got a right to our opinions, right?" he asked. "You black, so you can't like Trump? I ain't never made a decision based only on my colour. That's a form of slavery, mental slavery," he said to a crowd of several thousand, arguing that people criticize him because he "chose [his] right."

Kanye West At Sunday Service Salt Lake City talked about the Republican Party of Lincoln freeing the slaves and how he supports Trump: “I ain’t never made a decision only based on my color. That’s a form of slavery, mental slavery.” pic.twitter.com/0Cwom01ipF

​West previously spoke about the concept of "mental slavery" during a controversial TMZ Live interview last year. At the time, he suggested that slavery was a "choice."

“When you hear about slavery for 400 years ... for 400 years? That sounds like a choice,” he said. “Like, you was there for 400 years and it’s all of y’all? It’s like we’re mentally in prison. I like the word ‘prison’ because slavery goes too direct to the idea of blacks. It’s like slavery, Holocaust. Holocaust, Jews. Slavery is blacks. So, prison is something that unites us as one race. Blacks and whites being one race. We’re the human race.”

West is one of Trump's most famous supporters in the entertainment sphere. He even visited the White House to meet with the president last year and appeared on Saturday Night Live wearing a MAGA hat.