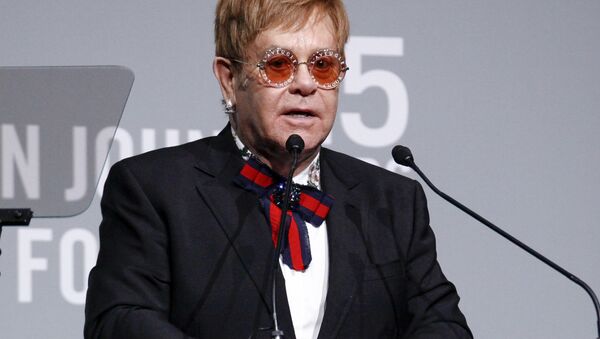 British pop icon Sir Elton John’s forthcoming book “Me” has already attracted a lot of attention from the public, following the disclosure of some intimate details about the musician’s relationship with Queen Elizabeth II and Princess Diana, with new revelations about the singer’s health being no less shocking to his fans.

Sir Elton John has revealed in his upcoming memoir “Me: Elton John Official Autobiography” how a major infection following his 2017 prostate cancer surgery left him in a 24-hours-to-death state, the Daily Mail reported.

According to abstracts from the book, set to be released on 15 October, obtained and published by the Daily Mail, Elton John, who went through a prostate cancer removal operation back in 2017, suffered a rare complication from the surgery that resulted in fluids leaking from his lymph nodes. However, while the problem went away after a routine colonoscopy just prior to his 70th birthday in March 2017, the singer encountered another near-death experience, feeling “worse than he ever had in his life” after he contracted a major infection in South America.

“I was taken to King Edward VII's Hospital in London, where I had a scan”, Sir John said while recalling his return to the UK from his South American tour. “I was told that my condition was so serious, the hospital didn't have the equipment to cope with it”.

“I had to be moved to the London Clinic. My last memory is of hyperventilating while they were trying to find a vein to give me an injection… By 2.30pm, I was on the operating table, having more lymphatic fluid drained – this time from my diaphragm”, the British pop icon revealed.

The musician then uncovered that after two days of intensive care, MRI scans, and doses of antibiotics, that the infection he suffered from was so serious that he was only one day from death.

“The doctors told David I was 24 hours away from death. If the South American tour had gone on for another day that would have been it: brown bread”, said John referring, to his husband and long-time partner David Furnish.

“So I was incredibly lucky – although, I have to say, I didn't feel terribly lucky at the time. I lay awake all night, wondering if I was going to die. In the hospital, alone at the dead of night, I'd prayed: Please don't let me die, please let me see my kids again, please give me a little longer”, the shocking revelations read. The singer was allowed to go home after 11 days in hospital.

Sir Elton John is currently on his legendary Farewell Yellow Brick Road: The Final Tour that began in 2018 and will go on until 2021. It will see the pop icon perform in 300 shows on five continents. His upcoming book “Me: Elton John Official Autobiography” has already attracted a lot of attention from the public, following shocking revelations about John’s encounters with Queen Elizabeth II and Princess Diana.