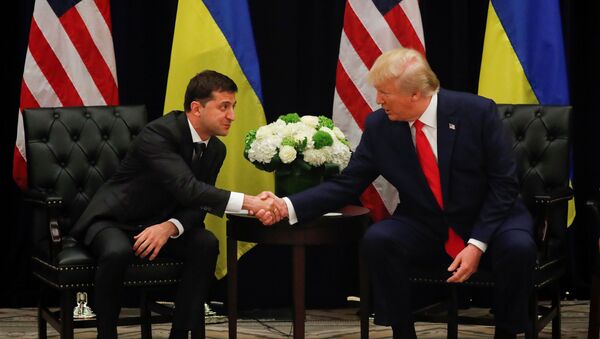 © REUTERS / JONATHAN ERNST
Subscribe
Lilia Dergacheva
All materialsWrite to the author
According to newly released documents, there was to be a meeting between the US president and his Ukrainian counterpart based on the results of a widely debated phone call that hit a raw nerve with the Democrats. However, the plans appear to have been ditched, with one WH diplomat arguing that there was never any quid pro quo.

The US House Intelligence, Oversight and Reform, and Foreign Affairs Committees, which are in charge of impeachment hearings, released a trove of text exchanges between top US diplomats revealing their internal turmoil regarding Ukraine on Thursday night.

The documents suggest that US diplomats told Ukraine’s President Volodymyr Zelensky that a high-profile White House visit to meet Donald Trump had to do with him making a public statement vowing to thoroughly look into Hunter Biden’s company, which is embroiled in a corruption row, and a potential Ukrainian role in the 2016 elections.

The texts thereby suggested that the diplomats had made it clear that an improvement in US-Ukrainian ties would largely depend on Zelensky’s preparedness to cooperate in Trump’s quest to dot the i’s and cross the t’s in the case involving the operations of his main Democratic rival ahead of the 2020 vote, Joe Biden, and his son Hunter in Ukraine, where the latter joined natural gas company Burisma’s board of directors.

Just Ahead of Controversial Phone Call

The message exchanges between three US diplomats - Gordon Sondland, the ambassador to the European Union, Kurt Volker, the then special envoy to Ukraine, and Bill Taylor, the acting ambassador to Kiev, appeared to precede a July phone call between Trump and Zelensky, which triggered a formal impeachment inquiry by House Speaker Nancy Pelosi two weeks ago.

On 25 July, two days before the scheduled call, Volker reportedly promised Andrey Yermak, Zelensky’s close aide, “that assuming President Z convinces Trump he will ‘get to the bottom of what happened’ in 2016, we will nail down date for visit to Washington".

Zelensky's Statement in Black and White

Separately, Zelensky was fully “briefed” on the subject, so that “he’s got it”, Sondland, who is also a major Republican donor, texted Volker, while the latter replied by arguing that the crucial thing for Zelensky is to “say he will help investigation – and address any specific personnel issues – if there are any".

Sondland asked Yermak to forward a draft of Zelensky’s exact words that were to to be said. On the same day, Volker checked in with Trump’s personal attorney Rudy Giuliani and informed him about the statement that the Ukrainian president was going to make. 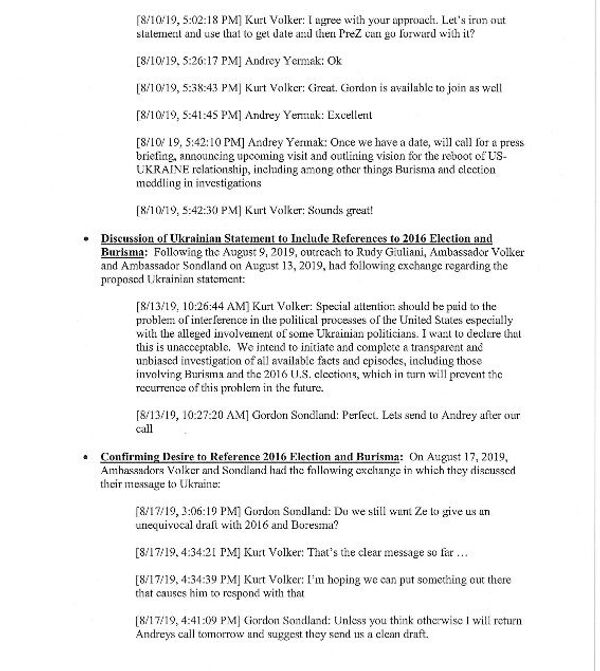 “Can we all get on the phone to make sure I advise Z correctly as to what he should be saying? Want to make sure we get this done right”, Volker said, with Giuliani agreeing.

However, the Ukrainians are reported to have expressed quite a few concerns over the arrangement, according to Taylor:

“Gordon, one thing Kurt and I talked about yesterday was [Ukrainian Finance Minister] Sasha Danyliuk’s point that President Zelensky is sensitive about Ukraine being taken seriously, not merely as an instrument in Washington domestic, reelection politics”, Taylor wrote to Sondland on 21 July. However, he reportedly insisted that he had to proceed “irrespective of the pretext”, stating that he “was worried about the alternative”. 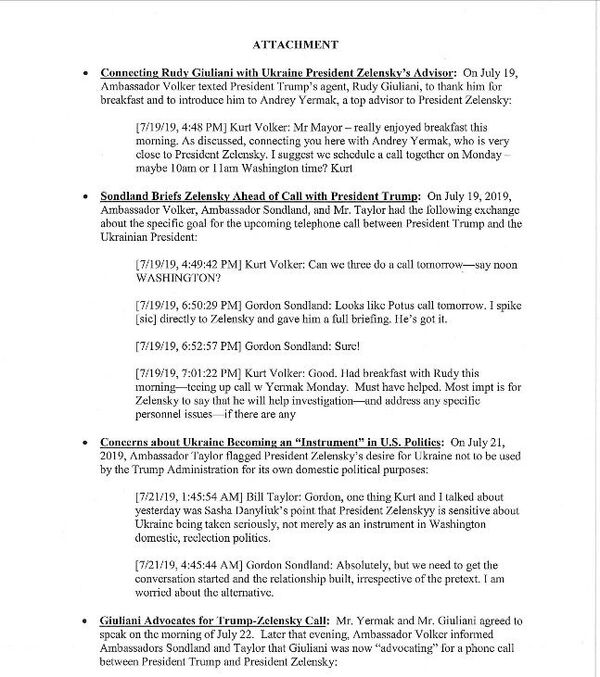 “Special attention should be paid to the problem of interference in the political processes of the United States, especially with the alleged involvement of some Ukrainian politicians. I want to declare that this is unacceptable”, the draft statement said.

“We intend to initiate and complete a transparent and unbiased investigation of all available facts and episodes, including those involving Burisma and the 2016 US elections, which in turn will prevent the recurrence of this problem in the future”.

The posted exchange went on and off until 9 September, with Sondland, having previously pressed with the original quid pro quo, backtracking in the end. The US ambassador to the EU finally opted for an emphatically formal tone and reverted to the official line, which allegedly happened after a complaint over the July phone call was leaked by a CIA whistleblower, as was reported by The New York Times.

“Bill, I believe you are incorrect about President Trump’s intentions. The President has been crystal clear no quid pro quo’s of any kind", he told Taylor.

On 3 October, Nancy Pelosi fired back at her Republican colleague House Minority Leader Kevin McCarthy, who asked that the impeachment inquiry of POTUS be temporarily suspended until transparent and equitable rules and procedures are introduced to guard the inquiry, “as is customary".

'The Bidens Should Be Investigated', Trump Persists in His Calls

Pelosi announced the commencement of a probe in late September, following a complaint that Trump had sought help from Ukrainian President Volodymyr Zelensky during a July phone call and that he had later directed intelligence leaders to keep a whistleblower report about that call from the House Intelligence Committee. Trump shrugged off all the allegations, stressing that there was nothing wrong in the telephone call, branding the inquiry a new round of "witch hunt garbage". Meanwhile, Zelensky referred to the matter by arguing that there was no “pressure” from Trump’s side.

Donald Trump sought - and has been seeking, as it has been revealed after his renewed calls to this end – details on the activities of former US Vice President Joe Biden, now a leading Democratic frontrunner in the upcoming election. The latter is known to have called on the Ukrainian government in 2016 to sack its prosecutor general, who was dealing with corruption in a company that employed Biden's son, Hunter.

Irrespective of the spiralling scandal, Trump publicly requested on Thursday morning that China help in the investigation, a move that instantly landed in the Democrats’ crosshairs. "They [Ukraine] should investigate the Bidens", Trump told reporters on Thursday. "Likewise, China should start investigation into the Bidens", he argued, prompting Pelosi to strike back by bringing up the rhetoric in a letter to Kevin McCarthy:

"I received your letter this morning shortly after the world witnessed President Trump on national television asking yet another foreign power to interfere in the upcoming 2020 elections. We hope you and other Republicans share our commitment to following the facts, upholding the Constitution, protecting our national security, and defending the integrity of our elections at such a serious moment in our nation's history", Pelosi’s response reads.