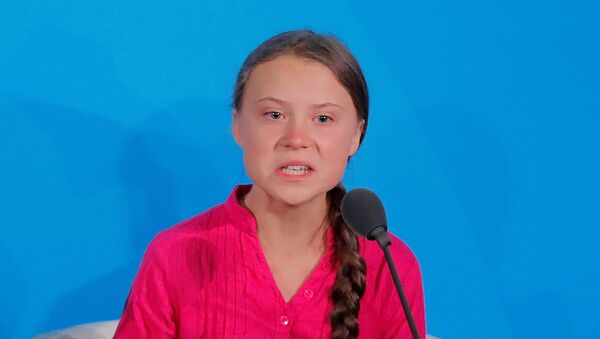 The 16-year-old’s speech at the United Nations climate summit was praised by her supporters but drew mixed responses from officials and world leaders.

US President Donald Trump retweeted a post that taunts Greta Thunberg’s passionate speech at the United Nations Climate Summit, in which the tearful teenager accused world leaders of "stealing" her dreams and childhood "with your empty words".

The Twitter user that goes by the name @Opinion8dKellie posted a video of the speech with the caption: “what an actress! I won’t be held hostage by someone who just got a learner’s permit. Trump retweeted this post, adding: “Keep up the great work Kellie!”

​Incidentally, this is not the first time that President Trump has taunted Greta Thunberg. The businessman-turned-politician walked past Thunberg in the corridors of the United Nations. The video of the incident showing Thunberg glaring at Trump sent social media users into a frenzy.

Bless whoever got this footage of Greta Thunberg eyeing Trump pic.twitter.com/1XEjz7hyoG

​Trump also posted a Tweet about Thunberg that many considered sarcastic. Commenting on her bold speech at the UN Climate summit, Trump said Thunberg “seemed like a very happy young girl looking forward to a bright and wonderful future.”

​Thunberg showed that she could take a punch and taunted the President by changing her Twitter bio, to read "a very happy young girl looking forward to a bright and wonderful future."

In 2018 Greta Thunberg left school and devoted her time to drawing attention to the dangers of climate change. What started as a one-person protest in front of Swedish parliament turned into the global action Fridays For Future. Millions of people worldwide took part in the climate strike in September with Thunberg leading the demonstration in New York.

The mainstream media praised the 16-year-old's speech at the UN Climate summit, but world leaders were less enthusiastic about it. French President Emmanuel Macron criticized Thunberg for her "radical position", while Russian President Vladimir Putin called the activist a kind and sincere girl, but stressed that Thunberg does not understand the intricacies of the world. This prompted the 16-year-old to change her Twitter bio again. Now it reads: "A kind but poorly informed teenager."