A Giant of French Politics: Jacques Chirac Will Forever Be Linked With Opposition to Iraq War 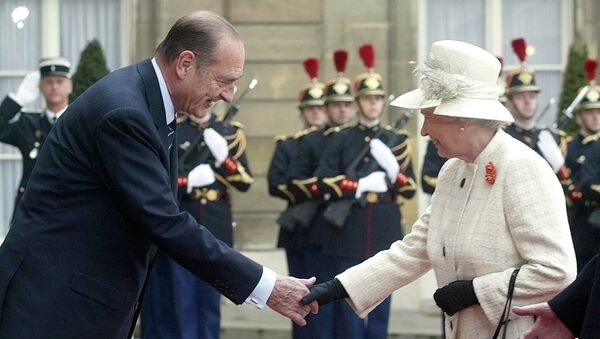 Jacques Chirac, who died on Thursday, 26 September aged 86, was a giant of French politics who will go down in history as the man who stood up to the US and Britain when they wanted the United Nations to support an invasion of Iraq in 2003.

Russian President Vladimir Putin said Mr Chirac was a "wise and far-sighted statesman" who was known "for his intellect and huge knowledge."

I am quite lucky to have briefly experienced the "Guignols de L'Info" Era in my youth. Chirac was one of its best caricatured character! #chirac pic.twitter.com/vvmBCWDak5

​Chirac was a conservative, a Gaullist, who was keen on the European Union and the vital Franco-German axis and although he was clubbable and full of bonhomie in diplomatic circles he was also a politician with a spine who was willing to stand up and be counted even when he found himself in the minority.

Such was the case in early 2003 when Tony Blair and George W. Bush, armed with bogus dossiers which claimed Iraq possessed weapons of mass destruction (WMD), demanded the UN authorise an invasion and “regime change.”

France, a permanent member of the UN Security Council, steadfastly opposed the invasion, angering the US where some embittered Americans decided to rename French fries “freedom fries”. 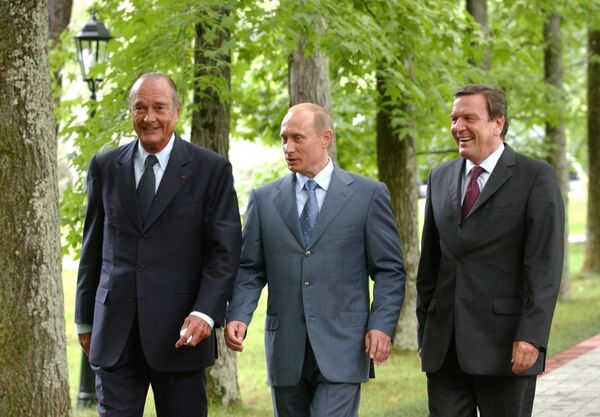 Putin, Chirac and Schroeder meeting in Sochi
© POOL
/
Go to the mediabank

Mr Chirac, who denied he was a pacifist or anti-American, said: "War is always a last resort, always an admission of failure, always the worst of solutions, because it brings death and misery.”

The US and the UK eventually sent troops into Iraq anyway, overthrowing Saddam Hussein but leading to years of anarchy and sectarian violence between Sunni and Shia Muslims and planting the seed for the genesis of Daesh.

Chirac was born in Paris in 1932 to a middle class family and as a child he lived under German occupation and witnessed the liberation of the French capital.

​In the 1950s he graduated from university and embarked on a career in the civil service, before joining the army and siding with the ultra-nationalist Algerie Francaise party, which tried to resist France granting independence to Algeria.

But by 1967 Chirac had metamorphosised into a moderate Gaullist and soon became a junior minister under President Georges Pompidou.

In 1974 Chirac backed Valery Giscard d'Estaing for president, against the Gaullist establishment.

President @JunckerEU was moved and devastated by the news that Jacques Chirac has passed away.
For him, Europe is not only losing a great statesman, but also losing a dear personal friend.

His legacy for France and the European Union will stay with us forever. 🇫🇷🇪🇺 pic.twitter.com/bRui4it791

​When Giscard won the election he made Chirac prime minister, aged just 41.

Chirac quit two years later after a row and began plotting his own route to the Elysee Palace.

He became Mayor of Paris in 1977 and created his own party, the Rally for the Republic (RPR), which later changed its name and is still represented in parliament as Les Republicains.

Had to look up Chirac's height. He was 1,89m. pic.twitter.com/AnEdurMzk4

​In 1981 he was knocked out in the first round and Francois Mitterrand became the first Socialist President of France since the war when he defeated Giscard in the second round.

Seven years later Chirac reached the second round but Mitterand beat him by 1.5 million votes.

In 1995 Mitterand, who was 79 and dying of cancer, stood down and Chirac won the presidential election, defeating the Socialist Lionel Jospin.

Two years later he gambled on dissolving parliament in the hope of securing a mandate for economic reforms but the Left won the parliamentary elections and he was forced to soldier on with Jospin as his prime minister.

He was re-elected in 2002 but only after Socialist voters backed him to keep out nationalist leader Jean-Marie Le Pen.

​Chirac’s second term was a disappointment as France's economy stagnated and his approval ratings plunged to 19 percent.

His final years in power were clouded by corruption allegations, linked to his time as Mayor of Paris and a popular French TV puppet show lampooned him as "Super Liar."

In 2012, five years after he handed over the keys of the Elysee Palace to Nicolas Sarkozy, he was convicted of misuse of public funds, the first head of state convicted since Nazi collaborator Marshal Philippe Petain in 1945.

​In private Chirac enjoyed Mexican beer, Asian art and Japanese poetry but in public he played down his intellect.

He leaves behind a wife, Bernadette, and two daughters, Laurence and Claude.