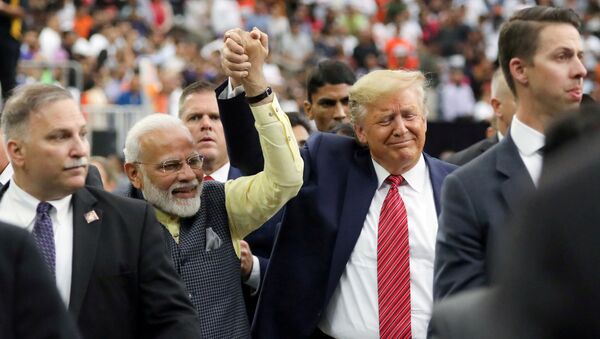 Prime Minister Narendra Modi’s bonhomie with US President Donald Trump has been setting the social media on fire ever since India’s leader reached America on 22 September and rallied alongside POTUS at the "Howdy Modi" event in Texas.

As a token of the much-talked-about bond they displayed at the “Howdy Modi” event recently held in Houston, Texas, Prime Minister Modi has gifted President Trump a framed picture of the two of them walking on stage towards a humongous gathering.

The picture shows the two leaders holding hands and flashing their friendship to over 50,000 Indian-Americans, who had gathered at an event called “Howdy Modi” on 22 September.

Memories from Houston, where history was made!

PM @narendramodi presented a framed photograph from the #HowdyModi event to @POTUS @realDonaldTrump.

Modi’s 50 million social media followers took to the micro-blogging site and shared their responses to the gesture.

This picture is very amazing, the enthusiasm of people from all over the world was seen to see this scene.

Thank you very much American people, Prime Minister Narendra Modi is not only India but the most powerful Prime Minister of the world.#HowdyModi pic.twitter.com/qOVXQmuspP

Keep it safely Mr.Trump because U.S President Election is next year. Mr.Modi is a global leader.

The photograph was presented as the two heads of state met in New York on the sidelines of the UN General Assembly session.

While Prime Minister Modi is in the US, the leaders are putting their friendly relations on full display.

President Trump compared Prime Minister Modi to the American "King of Rock and Roll", Elvis Presley, while addressing him as the “Father of India”.

With nearly 5,000 tweets, #FatherOfIndia is trending on Twitter, but not all Indians are amused, as Mahatma Gandhi is known as the Father of the Nation.

Modiji is a fatherly figure to Indians, and he is 'The great son' of Bharat Maa.

The concept of 'Father of nation' itself is unacceptable, since it very much distorts our great civilization & the respect we have for Bharat Maa. #FatherOfIndia https://t.co/t1EqoPBEFH

If someone calls you Elvis and Rockstar, it means you are a great entertainer. Global world leaders are called visionary & statesman... #Trump #FatherOfIndia #Fatherofnation #ModiInHouston #ModiInUSA #Gandhi150 #MahatmaGandhi #GandhiJayanti

The Houston event was the largest gathering for an invited foreign leader visiting the United States other than the Pope and it was also the first event where an American President addressed such a huge Indian expatriate audience at one place in the country.