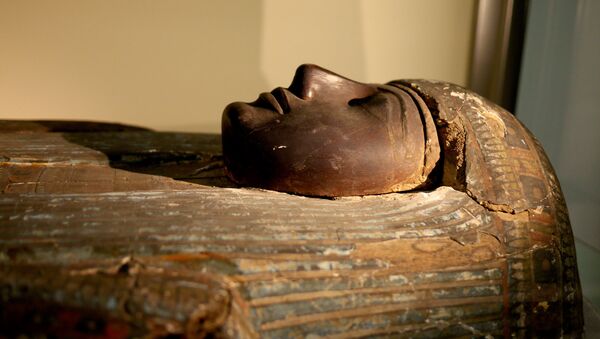 CC BY-SA 2.0 / Franklin Heijnen / Egyptian mummy
Subscribe
An analysis of ancient mummies by researchers at the University of Texas Health Science Center found that people who lived 4,000 years ago in areas now known as northern Chile and the Middle East had arteries that were much more clogged than originally believed.

The researchers detected cholesterol in the arterial tissue of three men and two women who were between the ages of 18 and 60 when they died. Three of them are believed to have died from pneumonia, while one is believed to have died due to renal failure. The last died from an unknown cause. Four of them lived in South America and one in the Middle East.

The study, which will be published in the October edition of the American Heart Journal, used an imaging technique called near-infrared spectroscopy to detect accumulated cholesterol in the hearts and arteries of the mummies. Typically, researchers have used an imaging technique called computed tomography to scan mummies’ blood vessels, organs and bones. However, that technique reveals accumulated calcium - not cholesterol - in arteries.

“I wanted to see if heart disease is a modern-day problem. It appears to have been a problem for a very long time,” Dr. Mohammad Madjid, the study’s lead author, is quoted as saying in a September 20 press release.

Madjid and his team are the first to ever use near-infrared spectroscopy to detect cholesterol in mummies.

“A catheter is placed on the sample, and it sends out signals. The signals bounce off the tissue and come back. You can tell the difference between various tissue components because each has a unique molecular signature, like a fingerprint,” Madjid said in the press release, describing the near-infrared spectroscopy process.

“Noninvasive near-infrared spectroscopy is a promising technique for studying ancient mummies of various cultures to gain insight into the origins of atherosclerosis,” the researchers concluded.

According to the National Heart, Lung and Blood Institute, atherosclerosis is a disease caused by the buildup of plaque inside the arteries. Plaque consists of fat, cholesterol and calcium. Over time, plaque can harden, limiting the flow of blood to the body’s organs and causing heart attacks and strokes.