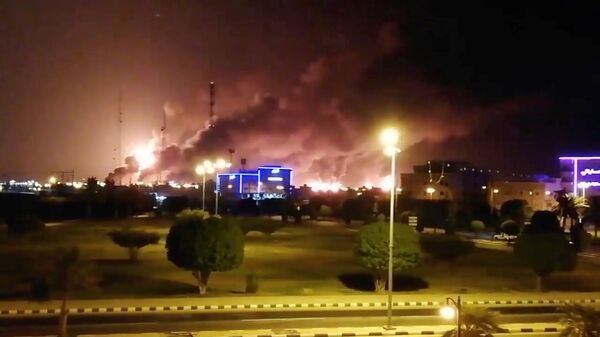 Saudi Arabia was forced to shut down two Saudi Aramco oil facilities - Abqaiq and Khurais - after drone attacks on 14 September claimed by Yemen's Houthis caused massive fires. The incident led to a cut in oil production of some 5.7 million barrels per day — about half of Saudi Arabia’s daily oil output.

Russian Deputy Foreign Minister Sergey Vershinin told journalists on Tuesday that a boost in the US military presence in the Middle East will not resolve tensions in the Persian Gulf, particularly in light of the recent attacks on Saudi Arabia’s oil facilities.

"We do not think that such issues can be resolved with an increase of military presence. We think that all the details must be verified; an objective investigation [must be carried out]. In any case, such issues should not be resolved through military means", Vershinin stressed.

The Saudi Defense Ministry held a press conference last week to allege what it presented as evidence of Iran's involvement in the attacks. Tehran has refuted the accusations.

The US Special Representative for Iran, Brian Hook, said Monday that the Middle East is at risk of war if the international community continues to do nothing to counter alleged Iranian aggression.

Iranian President Hassan Rouhani noted Tuesday that Yemen's Houthis humiliated Washington by being able to hit targets in Saudi Arabia due to the ineffectiveness of US missile defence systems.

Iranian Foreign Minister Mohammad Javad Zarif said that Saudi Arabia does not believe that Tehran is involved in the recent drone attacks on Saudi oil facilities, despite opposing remarks on the issue.

Rouhani said earlier that the United States seeks to use the recent drone attack on Saudi Aramco oil facilities to its advantage by striking billion-dollar deals and attaining a permanent military presence in the Middle East.

UN Secretary-General Antonio Guterres said in his opening speech of the annual UN General Assembly session on Tuesday that the world is facing an armed conflict in the Persian Gulf following the attack on the Saudi Arabian oil infrastructure.