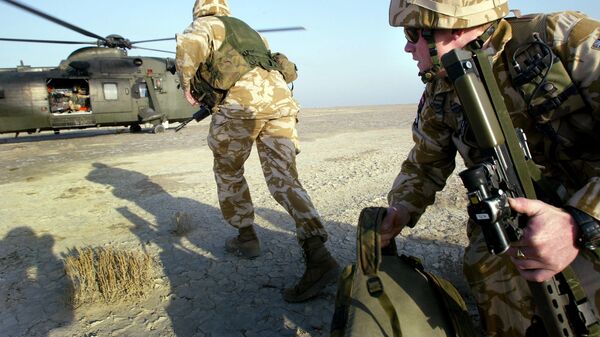 Ilya Tsukanov
All materialsWrite to the author
Earlier, UK Secretary of State for Foreign Affairs Dominic Raab said that based on the information made available to him, the idea that Yemen’s Houthi militia could be responsible for last week’s attacks on Saudi oil facilities was “entirely implausible and lacking in credibility.” The Houthis maintain that their drones carried out the attacks.

The United States is attempting to involve Britain in a coalition to possibly initiate some form of military action against Iran, a source speaking to the Daily Star has claimed.

“The US is trying to build a coalition of support to take some form of action against Iran. The UK is the US’s closest ally so not surprisingly we have been asked for our view,” the source said.

Recalling the faulty intelligence during the buildup to the US-led coalition’s 2003 invasion of Iraq, which the UK ended up joining, the source said that “this time it looks as if they have the Iranians bang to rights,” with the US accumulating “a wealth of intelligence and it all points to Iran.”

The source did not reveal the specifics of this alleged intelligence information, but did indicate that “every time the West refuses to act against Iranian aggression the ayatollahs become even more bold [and] convinced the US will never attack them.”

London has yet to verify the veracity of the report, but did join the US-led maritime coalition formed earlier this year aimed at escorting commercial vessels in the Persian Gulf and the Strait of Hormuz amid tensions with Iran. Saudi Arabia and the United Arab Emirates joined the maritime coalition last week, joining the US, the UK, Australia and Bahrain in the initiative. Other European countries declined to join.

On Friday, UK media reported that commandos from the UK’s Special Air Service special forces unit had been flown to the Royal Navy’s HMS Jufair naval base in Bahrain to guard the facility amid alleged intelligence warnings that 'Iranian-allied saboteurs' had picked the base and the UK Embassy in that country for potential attacks.

Iran did not comment on the story, but has repeatedly denied claims of its involvement in a string of recent attacks in the region, including the September 14 attacks on two Saudi Aramco facilities. Yemen’s Houthi militia claimed responsibility for those attacks, saying they used nearly a dozen kamikaze drones to carry out the strikes. The United States and Saudi Arabia have claimed that the attacks were launched from Iran.

UK Says It Wasn’t the Houthis

Speaking to the BBC on Sunday, Secretary of State for Foreign Affairs Dominc Raab cast doubt on Houthi involvement in the oil facility attacks. “From the information I have seen, I find it entirely implausible and lacking in credibility to suggest that those attacks came from Houthi rebels,” Raab said. Raab did not specify whom London blames for the attacks, and did not discuss the specifics of what intelligence information he has seen, but did warn that the UK would be taking "robust" action in response.

Earlier in the week, US media reported that President Trump had been briefed on various options for “retaliating” against Iran, including cyberattacks and military strikes, with Trump reportedly opposing military action in order to live up to his campaign promise of not entangling the US in new military conflicts abroad.

On Friday, US Secretary of Defence Mark Esper and Joint Chiefs of Staff chairman Gen. Joseph Dunford announced that the US would send “hundreds” of additional US troops, as well as additional air defence equipment, to Saudi Arabia and the United Arab Emirates to “send a clear message” about US support for its regional allies.

On Sunday, Iranian Foreign Minister Mohammad Javad Zarif warned that if a war does start amid the current tensions, “whoever starts [it] will not be the one who finishes it.” Zarif said he could not state with confidence that a war could be avoided given the current tensions.

The Houthi militia has repeatedly claimed responsibility for last weekend’s attacks on Saudi oil facilities, and warned again on Friday that Riyadh would face “more painful, deadly and destructive” attacks if the Saudi-led coalition’s ongoing “shelling, blockade and aggression” in Yemen did not stop. A Saudi-led coalition of nations began a military campaign in Yemen in March 2015 in an attempt to restore ousted Yemeni President Abdrabbuh Mansur Hadi to power. However, the offensive has been bogged down, and in recent years, the Houthis have launched dozens of missile and drone attacks against targets inside Saudi Arabia itself.