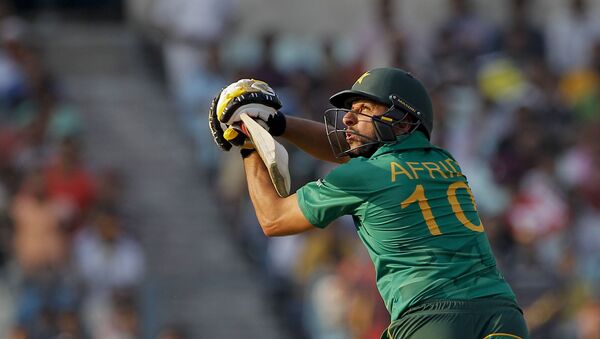 New Delhi (Sputnik): The Sri Lankan cricket team’s Pakistan tour was recently jeopardised when the top 10 Lankan players opted out of the scheduled tour of the country, citing security reasons after the Sri Lankan Cricket Board received warnings of the possibility of terror attacks.

Afridi has blamed the IPL cricket league as the reason for Sri Lankan players declining to visit Pakistan to play upcoming matches in the country.

Afridi made the allegations through a series of videos posted on Twitter from the accounts of Pakistani journalists.

In the video, Afridi can be heard saying in Hindi that the IPL had threatened Sri Lankan players with not providing them a contract if they toured Pakistan.

"Pakistan's always supported Sri Lanka, it never happened that we had a tour of Sri Lanka and our players rested. Sri Lanka's board should put pressure on their contracted players to go to Pakistan. Sri Lankan players who'll come will always be remembered in Pakistan's history", he added.

​Subsequently, after the Pakistani government assured the players' security, the Sri Lanka Cricket Board confirmed that its team will be touring Pakistan, scheduled between 27 September and 9 October.

“(The) tour of Pakistan will go ahead as planned, following assurances given by the government of Pakistan that it will provide maximum security arrangements for the team during their entire duration of stay in Pakistan", the Sri Lanka Cricket Board said.