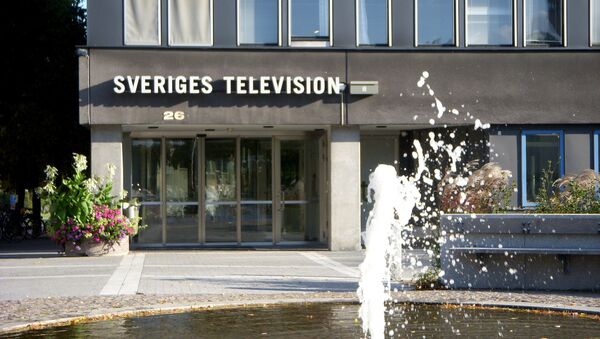 CC BY-SA 3.0 / Holger.Ellgaard / Sveriges Television
Subscribe
The journalists from national broadcaster SVT were on their way to report about plans to erect a controversial mosque.

A reporter crew from Sweden's national television SVT has experienced a stone-throwing incident and had their car vandalised during a work trip to the immigrant-heavy quarter of Stenhagen in Uppsala.

The journalists visited the troubled district on Thursday in order to interview people from the Dawa Foundation that intends to build an Islamic centre in the neighbourhood.

When they approached the forest grove where the future mosque is to be built, “large stones” were thrown at them. By their own admission, they first thought it was cones and continued to their destination, only to discover that these were rocks.

​While the journalists themselves emerged from the incident unscathed, when they returned to their car, they discovered the rear window had been smashed and the tyres slashed. The car had to be towed from the area. The incident is currently under police investigation as attempted assault and injury.

“It feels sad that this is happening, we were there to do our job. It could have ended badly”, SVT Uppsala's editor-in-chief Daniel Legue said, pointing out that some of the stones were the size of fists.

Almost two weeks ago, the right-wing Sweden Democrats (SD) in Uppsala held a protest against the planned mosque in the district. The campaigners from SD were attacked with stones at the site.

“There were a bunch of young people of foreign backgrounds. One of them told us to leave the place immediately and threatened bad things were going to happen. Another was more diplomatic, offering us to pack our things together and get away within 20 minutes”, SD municipal councillor Simon Alm wrote on Facebook. According to him, the hostile youths threw eggs and stones about 10 centimetres in size. According to him, all the police did was call on the youths to stop. No effort to arrest the perpetrators was made.

In 2016, a crew from 60 Minutes Australia was attacked in a Stockholm suburb while shooting a report about immigration in the immigrant district of Rinkeby. The police subsequently dropped their investigation into the matter on the grounds that the cameraman was “only slightly injured” and didn't seek medical attention.

The construction of an Islamic centre next to St. Mary Church in Stenhagen has been discussed for the past six years and is being lobbied by the Dawa Foundation. Its representatives have been active in the Uppsala Mosque, which previously invited radical imam Abo Raad, who reportedly had contacts with Islamists, including Daesh*. Raad and his son were taken into custody by the Migration Board in 2019, after the Swedish Security Police SÄPO concluded he posed an acute threat to the country's security. However, his deportation cannot be carried out because of the alleged threats he is facing in Iraq.

* Daesh (IS/ISIS/ISIL/“Islamic State”) is a terrorist organisation banned in Russia and other countries.

000000
Popular comments
I lost respect for Sweden a long time ago. She is a miserable weak elderly whore with an inferiority-complex who invites being raped and bashed. That is how low she has fallen. A sad end to a once- bright shining beacon of modernity ,tolerance and progressiveness. She allowed herself to be used and abused by ragheads!

Dolce Vita
20 September 2019, 10:32 GMT3
000000
These very same "journalist" are regularly making reportages that propagates for more migrants and "better understanding" (of skyrocketing cases of gang rapes, criminality and terrorism apparently). There's 2.5-3 million Muslim rapefugees and counting in Sweden, this year only (so far) has seen an influx of 150.000 primarily Afghan men (labelled as young boys) and yet more Somalis, most of which illiterates.