When the Eagle Met Golden Balls: Khabib Bumps into Beckham During Football Game in Paris 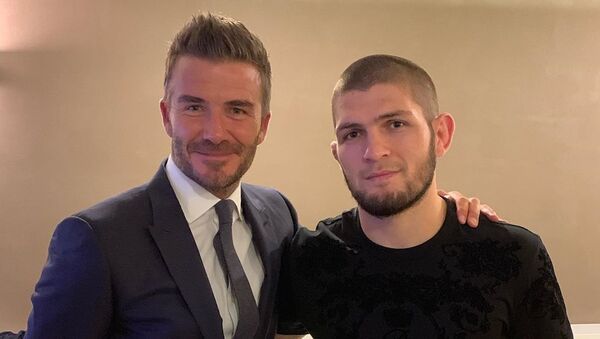 © Photo : khabib_nurmagome/instagram
Subscribe
International
India
Africa
Wednesday night was hot not only for PSG fans after their club trounced Real Madrid 3-0, but was highlighted by a chance encounter between two legends: football icon David Beckham and UFC champ Khabib Nurmagomedov.

Russian UFC fighter Khabib Nurmagomedov, who recently defended his lightweight championship title by defeating American mixed martial artist Dustin Poirier with a rear naked choke hold in the third round of their bout in Abu Dhabi, has shared his joy with fans after randomly bumping into legendary English footballer David Beckham at the Champions League game between Paris Saint-Germain and Real Madrid on Wednesday.

Khabib, who is a well-known football fan, shared a picture of himself together with a well-dressed Beckham on Instagram, by captioning the photo “Legendary” and tagging the former footballer.

Beckham, who has played both for PSG and Real Madrid in the past and is currently presiding over Inter Miami CF and co-owns Salford City, has not commented on the pic. Khabib, however, later said that the two had shared dinner together after the game and had quite a productive talk.

Khabib’s fans were ecstatic to see the two legends together. The Russian fighter currently holds the longest undefeated streak in the history of the UFC with 28 consecutive victories. One Instagram user even recognised the fighter's merits by commenting “Khabib with a fan”.

This was not the first time that Khabib has encountered an international celebrity at a PSG match. He regularly attends matches and was happy to share with fans his run-in with famous Hollywood actor Leonardo DiCaprio during PSG’s Champions League game with Liverpool last year.

He knows about @ufc more than me. @leonardodicaprio #выжившие

The match between PSG and Real Madrid finished with a score of 3-0 for the home team, despite Neymar’s suspension and injuries to Kylian Mbappe and Edinson Cavani who missed Wednesday's game.