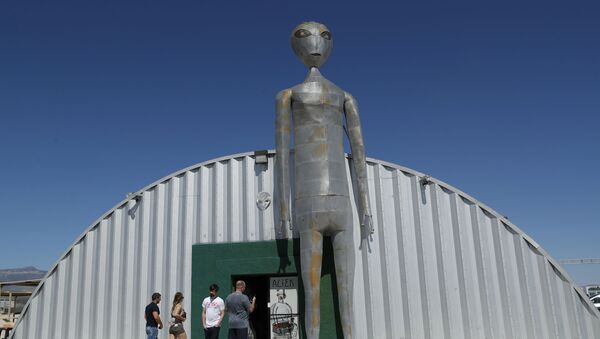 © AP Photo / John Locher
Subscribe
While the viral “Storm Area 51” event that purported to prove the existence of aliens allegedly concealed by the highly classified US base has been cancelled, the US military is still preparing for an influx of intruders to the site by putting up barricades and deploying extra military personnel.

Four star US General David Goldfein, who serves as the Air Force Chief of Staff, has commented on the viral “Storm Area 51” event while speaking at the Air Force Association’s Air, Space and Cyber conference in National Habor, Maryland. He discouraged UFO hunters from storming the base and warning that some US “secrets” had to be protected.

"We're taking it very seriously", General Goldfein said while appearing alongside Acting Air Force Secretary Matt Donovan. “Our nation has secrets, and those secrets deserve to be protected".

The chief of staff for the US Air Force also warned that the US military was preparing for the inflow of unauthorised visitors to the area in the upcoming days and that barricades were being erected to protect the Nevada base from potential intruders.

"People deserve to have our nation's secrets protected", Goldfein added, without specifying what kind of “secrets” were hidden at the highly classified facility.

The original “Storm Area 51” event that was started as a joke by a 20-year-old California student Matty Roberts went viral on Facebook this summer, with more than 2 million people signing up for a satirical plan to “see them aliens” on 20 September.

Things, however, got out of control with the US military warning about the consequences of trespassing on the top secret US facility, and the event, which subsequently transformed into a desert festival called “Alienstock” in Rachel and “Storm Area 51 Basecamp” event in Hiko, Nevada was completely cancelled due to the security concerns of organisers and local citizens, with Roberts warning that it could turn into a "humanitarian disaster".

US Air Force Secretary Donovan nevertheless warned that due to the widespread publicity the event received, the US military was still expecting “some folks” to show up in the surrounding area, with “extra security measures” and preparations put in place ahead of 20 September.

"We're prepared, and we've provided them additional security personnel, as well as additional barricades", Donovan said during the conference.

While the Nevada festival has officially been cancelled, an alternative festival is currently scheduled to take place in downtown Las Vegas on 19 September, and will feature some artists originally scheduled to play at Alienstock.

Last week, two Dutch citizens who were trespassing on the Nevada National Security site near Area 51, while trying to film the classified area from the inside, were detected and then arrested by the Nye County Sheriff.

The US Air Force previously warned that they “stood ready” to defend the military facility from unauthorised visitors.